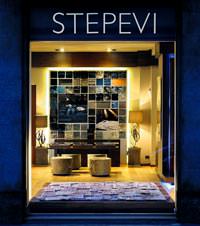 With stores already opened in France, Italy and England, Stepevi will soon be opening their first U.S. store in New York’s famous Soho district. Step Carpet CEO Cem Şengör states, "We are now looking for a store to open in China.”

While Turkish brands have already joined the race to find store locations in Europe and the Middle East, they are now setting their sights on America. One of Turkey's most established carpet manufacturers, Step is about to embark on a whole new continent, starting off with a brand new store in Soho which opens next week. The New York branch will be the sixth for the brand, which already boasts stores in Italy, France, Thailand, England and Dubai.

Stepevi, a new Soho store set up in an area spanning 250 square meters, has also been written up in the New York Times. The store was designed by famous designer Zeynep Fadıllıoğlu. With a history spanning back to 1919, Step Carpet CEO Cem Şengör explains that store prices in the United States have dropped due to the crisis, which offers a unique opportunity for brands. "Rents are cheaper here than in Nişantaşı," states Şengör, also hinting that they may open additional stores in the U.S. Explaining that the tension with Iran has also affected the carpet market, Şengör states, "There is an embargo in place in the United States against rugs from Iran. Therefore, Turkish rugs have become quite popular. We used to just sell our products, however we decided to open a store in order to satisfy the demand."

NEW DESTINATION IS A RICH ASIA

Step Carpet operates international stores under the name Stepevi. Thus far, Stepevi has covered the entire 500 square meter mansion belonging to Dubai Emir Al Maktoum and has also entered the homes of Russian oligarch Roman Abramovich and French footballer Nicolas Anelka. Noting that they also have a number of famous clients in the U.S., Şengör states, "Right now we have a project directed towards Asia. We are hoping to open a store in China."

Şengör explains that their first store in China, whose growing number of wealthy continues to increase exponentially, will be in either Shanghai, Hong Kong or Singapore. Şengör also explains that they have recently manufactured their first ever organic carpet line made from rose extracts, out of their facilities in Isparta, and says; "Stores for brands such as Christian Dior, Tommy Hilfiger and Celline also use our carpets and we produce special collections for each of them."