Six and a half billion dollars for Turkey’s 2023 goals 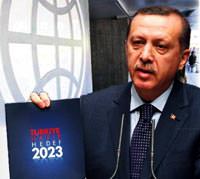 The World Bank will be providing 6.5 billion dollars of financial support for Turkey’s 2023 vision. The World Bank’s Country Director for Turkey Reiser states, "With Turkey’s success over the past ten years it is now in a position to have the opportunity to increase its role in the global economy.”

Turkey has now received support from the World Bank in order to fulfill its target for the year 2023 of becoming one of the world's top ten economies with exports reaching 500 billion dollars and the national income toppling two trillion dollars. The bank has established a new nation strategy in order to support Turkey's objectives for the year 2023. With the four-year Country Partnership Strategy (CPS) approved by the Executive Directors Board, 4.45 billion dollars in financial support will be provided for government programs. In addition, the International Finance Corporation (IFC), also a member of the World Bank Group, will be offering two billion dollars in support to Turkey's private sector, bringing the total financial support allotted for Turkey up to 6.5 billion dollars.

An announcement by the World Bank on the 2012-2015 term strategy, states, "This will be a business plan in support of Turkey's own development and reform agenda outlined in the Government's 9th Development Plan and the 2012-2014 Medium Term Program. The goal of the strategy is to support Turkey in its ambition to become one of the ten largest economies in the world by 2023 through fast, sustained and inclusive growth that respects the environment."

"Turkey has the opportunity to build on a decade of success to bring high standards of living to all of its population and further increase the country's role in the global economy," World Bank Country Director for Turkey Martin Raiser said. As Turkey has entered high income status, our partnership needs to constantly evolve to ensure Turkey gets the best out of the combination of competitive financing, cutting edge knowledge and global experience that the World Bank Group has to offer."

The partnership strategy is organized around three core objectives being, enhanced competitiveness and employment opportunities, improved equity and public services and deepened sustainable development. These will include support for education, energy, health and public services.

URBAN RENEWAL TO BE A FOCUS

The World Bank announcement pointed out that Turkey's successful economic and social reforms have drawn international attention, and stated that during this CPS term, the health sector and preventing and reducing the risk of natural disasters will be a priority focus.