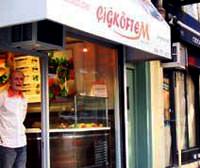 Turkey’s traditional culinary delights are finding their way to the mega U.S. metropolis New York. Both Güllüoğlu and Çiğköftem have locations situated next to some of the city’s most expensive restaurants, while Simit Sarayı will also be opening a branch soon.

Turkish cuisine has embarked upon a new era throughout the world. It is very well possible to come across a Turkish restaurant on many of the most popular streets in big cities throughout the Far East and Europe. Furthermore, for the most part these are restaurants that have come straight from Turkey. Especially over the past six months, in an unbelievable turn of fate, Turkish cuisine is the talk of the town in New York's Manhattan. Some of the most prestigious newspapers, such as the New York Times and the Wall Street Journal are publishing spots on Turkish cuisine.

Last week, we decided to witness this development for ourselves. With our own eyes we saw lines develop for Turkish food on New York's streets. The reason being, that the economic crisis has altered America's consumer habits. They now eat high quality, hygienic, affordable and healthy food. In New York alone, there are over 14,000 restaurants and 35,000 food and beverage selling locations, making it one of the world's cities with the highest number of food-oriented operations. The number of employees surpasses 400,000. Sixty-six percent of New Yorkers eat out. The remaining percentile consists of those who order in. In other words, this is a city where it is rare that residents actually go into their kitchen to prepare a meal.

GÜLLÜOĞLU
After spending 32 years in New York, in 1999, Ercan Karabeyoğlu returned to his homeland with his American wife and two daughters. However, things didn't go as expected with his partner. Instead he got into contact with Nejat Güllüoğlu and promised him that he was willing to leave his wife and older daughter in Turkey, while he would return to the U.S. with his younger daughter in order to bring the brand to America. He first opened a Güllüoğlu branch in Brooklyn. Since then Karabeyoğlu has successfully opened up six branches in the United States, four of which are in New York, one in Los Angeles and one in Miami. The 2011 revenue for the branches in New York was two million dollars.

How many branches are there?

What product sells the most?

Definitely our pistachio baklava and our su böreği... We sell approximately 15 trays of each every day. Our Kağıthane branch in Istanbul sells 25 to 30 trays of baklava a day. We are now becoming quite competitive with simit. Americans call simit 'The Lord of the Rings'. They also sell for meetings. For just one meeting we sell 15 trays at once. I am not even counting those days. For example at meetings held by Muhtar Kent and more recently Donald Trump, we sell tray after tray of baklava.

Who else are your patrons?

Right now in Astoria Queens it is the Greeks. We are operating in an area that has the highest population of Greeks after Greece. There are more Greeks there than there are in Cyprus. We have opened up right next to their biggest church. During Easter we sell baklava to 50,000 people. The Mayor of Brooklyn is also our regular customer.

How do you supply your baklava?

Right now our baklava is prepared and cooked in Turkey and then brought over here. The baklava sold here is exactly the same as the baklava you get in Turkey.

Founded in Turkey, Çiğköftem has now acquired 154 branches while also managing to draw in customers from America, the homeland of the hamburger. Explaining that they brought in 7.3 million liras in revenue last year, Çiğköftem Brand Manager Ahmet Kaya states that their target for this year is to reach 10 million liras. We met with Mehmet Atmaca, one of the partners of the Çiğköftem restaurant located in Manhattan's East Village, who tells us that they have developed a special product for the U.S. entitled the Çiburger. Atmaca says, "We aim to open 15 branches in Manhattan alone."

How long have you been in America?

I have been working in construction here for 30 years. I am from Of, Trabzon. I got into this business through a relative of mine and the owner of Çiğköftem Ahmet Güler. We opened our first restaurant in Manhattan. My partner Cengiz Demir worked on auto bodies. Both of us have since left our jobs and are working on this. We opened our second shop in New Jersey.

We have a stable clientele. Fifty percent of our customers are American. They are curious and they like to try things. Our restaurants are vegetarian… Meanwhile, Mehmet Okur is a good customer of ours.

Were you interest in Çiğköfte?

Simit Sarayı will be opening in New York in August. At present, Simit Sarayı has over 200 branches and 3,500 employees operating throughout Turkey, the Middle East and Europe. We will be opening up our first shop in the U.S. on seventh street in Manhattan. By the end of next year, our brand aims to open four branches in New York as well as new branches in Chicago, Seattle and California.