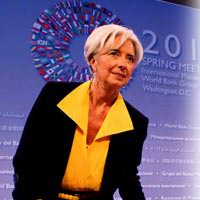 IMF Chief Lagarde states that the debate surrounding belt-tightening and growth in Europe is baseless. According to Lagarde, financial discipline and growth are possible at the same time and suggests a system which has been in place in Turkey since 2001.

International Monetary Fund (IMF) Director Christine Lagarde suggests Turkey's combination of financial discipline and focus on growth as a path to be followed by the world. Mentioning the debate in Europe on austerity measures and the growth based model, Lagarde expressed that Turkey's economy since 2001 has been able to combine a strong budget policy as well as extreme growth. Pointing out that committing to financial discipline and structural reforms during a time of growth was the correct path, Lagarde stated, "This is not the time to be short-term or narrow minded. By creating appropriate policy combinations, we could head towards solving problems together."

The IMF Director went on to state that those who are in the 'growth camp' say they need further governmental aid in order to grow. Meanwhile, those of the 'belt-tightening camp' say that they government is already in excessive debt, and suggests ministers due all they can in order to curb it. "I think this is an incorrect debate. We could create a good strategy for both today and tomorrow," says Lagarde.