Babacan: S&P is way behind 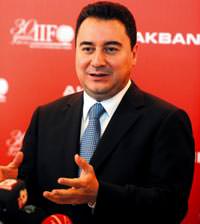 In reference to the recent downgrade of Turkey’s rating, Deputy Prime Minister Ali Babacan says S&P is way behind and their recent announcement “has had no impact on Turkey whatsoever”.

Delivering the key address at a conference held by the Institute of International Finance, entitled 'Building Istanbul as a Key Financial Center', Babacan touched upon the recent switch by S&P of Turkey's rating from positive to stable, by stating that credit rating institutions are way behind. "They used to be institutions that would direct investors. Now, they are no longer frontrunners and instead follow developments two to three years behind the fact. I don't say anything when a rating goes up or down. I don't think it's very beneficial for us to consider ratings determined by credit rating institutions to be extremely important. The people who evaluate us are actually investors, the international financial community and analysts. If a direct increase in capital continues in Turkey and if 12 banks are granted permission to open representation in Turkey over three years' time, then that means that things are going well. There has been absolutely no impact whatsoever from S&P's outlook change on Turkey."


TURKEY IS SHOWN AS AN EXAMPLE

During his address, Deputy Prime Minister Ali Babacan also mentioned that there are significant developments in Turkey's income distribution. While the distribution of income has been negatively affected in both developing as well as developed nations, a report released by the Organisation for Economic Co-operation and Development (OECD) uses Turkey as an example of the exception.

Improvement in the current deficit to continue

Also speaking at the conference, Central Bank President Erdem Başçı stated that Turkey follows its own specific liquidity policy and actively utilizes the interest corridor. Başçı went on to state that when looking at the export and import index, from the start of 2011 the import volume index has been horizontal and even downwards, while exports have displayed a moderate increase. "Developments pricewise have not been extremely helpful. The prices of energy and other imported goods have remained high, whereas export prices have not increased that much. Therefore, we have been unable to directly reflect the improvement on to the current deficit."

We are devoted to the Istanbul finance center project

IFF Executive Board Member and Akbank Chairman of the Executive Board Suzan Sabancı Dinçer states, "We have devoted ourselves to transforming Istanbul into a finance center and to making it a sustainable city." Dinçer went on to say that they have seen how important trust is in recovering and strengthening the market following an economic crisis. "We have dedicated ourselves to establishing better education, health and research centers. We want Istanbul to be a greener and healthier city for everyone. This is actually everyone's joint project," says Dinçer who went on to emphasize that it is also important to establish Istanbul as a city compatible with the business lifestyle.