The Prime Minister was right in his reaction to S&P 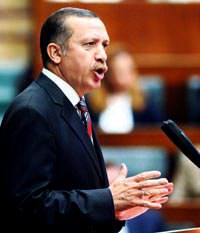 IMF Chief Lagarde expressed that Turkey’s reaction to S&P's rating downgrade was correct. Lagarde stated, "I heard what the Prime Minister said. If it is thought that a mistake was made, then there is no problem expressing it. We made a mistake in growth and rectified it. That is something everyone can do.”

Arriving to Istanbul in order to attend the Investment Advisory Council, International Monetary Fund (IMF) Managing Director Christine Lagarde expressed a series of surprising statements regarding Turkey's economy. Bringing up the fact that after the IMF announced that Turkey's growth rate would be at 2.2 percent, they later dropped the growth rate to 0.4 percent and once again raised the rate to 2.3 percent, Lagarde stated, "We realized that we had kept our growth expectations for Turkey low. The figures presented to us during a meeting with Deputy Prime Minister Ali Babacan were convincing. If a mistake has been made that needs to be acknowledged. Therefore, we revised our growth expectations upward."

Commenting on Standard & Poors' downgrade of Turkey's note from positive to stable, Lagarde stated the following: "I have been closely following the developments with S&P. I heard what the Prime Minister said regarding this institution. If it is thought that a mistake was made, then there is no problem expressing it. I have never doubted Turks when it comes to confidence."

SEVENTY PERCENT OF THE FIGURES ARE GOOD

Emphasizing that Turkey's economic figures are not bad at all, Christine Lagarde stated, "Unlike others, I don't tend to look at the negative side of figures, I prefer to look at the positive aspects. When compared to other nations in the world, I think Turkey is in a very good position. Looking at figures on public dept, the debt's GDP rate as well as the growth rate, none of these are bad at all. Unemployment isn't great; however to before it is quite good. To summarize, 70 percent of the economic indicators are doing quite well."

Those who come to Turkey are impressed with the liveliness of its economy..
Lagarde stated that there are two indicators that need to be focused on when it comes to Turkey's economy. "Turkey needs to pay attention to the account deficit and inflation. I see that the account deficit will be surmountable with the liveliness of the nation. When it comes to Turkey personally, you can see the liveliness and the dynamism in the country. Those who visit the country are always extremely impressed by how vivacious the economy is."