"We will not be cutting off Syria’s water and electricity" 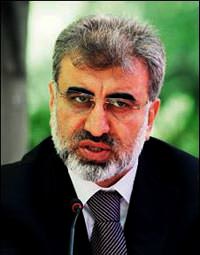 Minister of Energy and Natural Resources Taner Yıldız has announced that Turkey will not be disrupting water and electricity services to Syria during this period of increased tension.

Minister of Energy and Natural Resources Taner Yıldız met with economy correspondents to discuss current issues during which he also announced that they have given the start signal for the privatization of distribution.

Explaining that they will not be cutting off electricity or water to Syria at present, Minister Yıldız stated, "The issue of halting the distribution of water to Iraq through Syria is not on the agenda."

Yıldız also mentioned the steps planned for energy consumption, including changing all of the street lights in Turkey with domestically-produced light bulbs, and stated, "This will be conducted under the condition that they are produced in Turkey. This would equate to an annual savings of 500 million TL."

Energy is one of the most significant generators in terms of growth, explains Minister Yıldız, going on to state that by the year 2023 there will have been 100 billion dollars invested in nuclear and coal plants.
Yıldız also announced that they have presented a draft to the Council of Ministers requesting Turkey remain on daylight-savings time in order to better benefit from daylight. If the draft becomes law, this winter will be the last time that Turkey turns their clocks back.