Major players from the steel industry meet in Istanbul 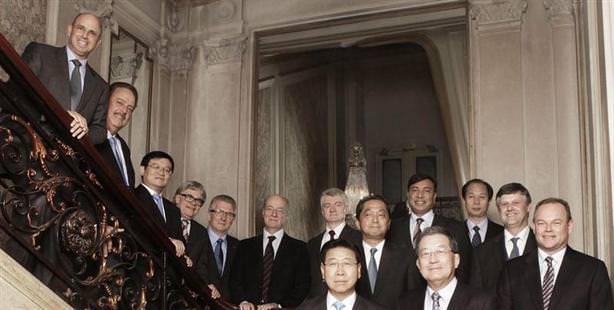 While Istanbul is fast becoming the region's financial center it has also become a prime destination for decision-making on the global future of a number of areas spanning from politics to economy, the arts and medicine, just to name a few. The most recent guests to grace their presence in Istanbul were the world's major players in the three billion dollar steel industry.

In a quiet and closed to the press meeting, the 175-member World Steel Association met along the Bosphorus in order to determine a new road map and to share their concerns. During the two-day long meeting, the world's steel giants decided on their new administrative board members and discussed the economic crisis and opportunities in the industry.

The World Steel Association (WSA), which generally selects rising star nations, such as China, Russia and Brazil to host their meetings, gathered in Istanbul's Çırağan Palace in the second week of July. Following the Istanbul meeting, the WSA's next stop amongst nations displaying fast growth will be New Delhi and Seoul.

MITTAL AND MORDASHOV WERE ALSO IN ATTENDANCE

Representatives, directors and CEO's from firms that bring in billions of dollars of revenue, such as POSCO, US Steel and Nippon Steel were joined by England's richest businessman Lakshmi Mittal, who has a 20.7 billion dollar fortune as well as Russian oligarch Alexei Mordasho, who is worth 10.4 billion dollars.

THE FUTURE OF STEEL DISCUSSED ALONG THE BOSPHORUS

The incoming 15-member new administration of the World Steel Association was also designated during the meeting held in Istanbul. The boss of ArcelorMittal Lakhsmi Mittal was selected for the WSA's new executive committee. In addition, some of the most stand-out names selected to serve on the WSA executive committee for the next three years are as follows: Korean POSCO's CEO Chung Joonyang, Japon Nippon Steel's Chairman Shooji Muneoka, Xiaogang Zhang Chairman of China's second largest steel producers Anshan, Chairman of the United States' leading US Steel John Surma, Alexei Mordashov the owner of Severstal, who in the past closely followed the Erdemir tender and Hajime Boda, the Executive Board Chairman of Japan's JFE Holdings.

EU CRISIS LAID TO THE TABLE

The main topics on the agenda for the firms participating in the meeting were the economic crisis and the future of the sector. Kibar Holding Vice-Chairman of the Executive Board Ali Kibar commented on the meeting by stating, "The crisis in Europe, developments in the region and the issues faced by the iron-steel market were all brought to the table."

Meanwhile, Joonyang, the CEO of Korean firm POSCO, which entered the Turkish steel market with Kibar Holding, also paid a visit to the construction site at the İzmit Industrial Complex.

GLOBAL STEEL IS IN THEIR HANDS

ArcelorMittal: A world leader in steel, ArcelorMittal has 261,000 employees and 98.9 billion dollars in turnover.

Nippon Steel: This Japanese firm comes in the sixth in the world league. Nippon Steel employs 59,183 people and has a 49.6 billion dollar turnover.

Severstal: Owned by Russian oligarch Mordashov, the firm has 84,000 employees and a turnover of 13.5 billion dollars.