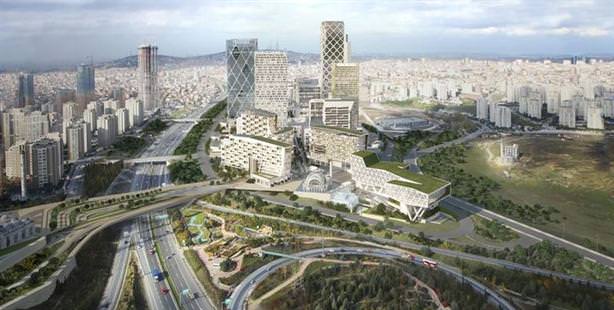 The details of Prime Minister Erdoğan's plans to establish two cities, one on the European and the other on the Asian side of Istanbul, are slowly beginning to surface. Each city will have a population of approximately 500,000. One city will be located between Kemerburgaz and Kayaşehir while the other will be established in the Şile region.

The final stages have been reached for Prime Minister Recep Tayyip Erdoğan's wild plans for Istanbul. SABAH has acquired the details of the 'two city' project for Istanbul. Both cities will have populations of 500,000. The city to be developed on the European side of the metropolis, between Kemerburgaz and Kayaşehir will help ease the distribution of Istanbul's dense population, while offering a newly developed region. The new European city will be based on the Korean capital Seoul model. As the population increased in Seoul, a new residential area was created in the southern region of the city. A significant portion of the population in addition to public establishments later moved to the newly developed area.

FORESTS WILL NOT BE TOUCHED

The new city established on the European side will be concentrated along the southwestern line of Istanbul. Plans are for the region which is laden with mining fields and huge forests, to become integrated with Kayaşehir in the years to come. A number of mines will be filled and parks and social areas will be created within the city, meanwhile ensuring that not a single forest is touched.

Infrastructure planning will be the first step in establishing the 500,000 population city on the European side of Istanbul. Taking into consideration the city's potential growth, infrastructure facilities will be made to accommodate well beyond the anticipated 500,000 population. In fact, the infrastructure of the city is being planned to accommodate one million. Just like the Seoul model, prior to residential planning the focus will be on realizing infrastructure investment plans such as for water, canalization and transportation. The Ministry of Transportation, the Ministry of Urban Planning and the Environment, Turkey's Housing Administration and the Real Estate Investment Partnership will be preparing protocol within this framework.

One of the most interesting factors in the construction plans for the new city, is that each building will be the same model and none will be able to be higher than the story-level restriction established. In addition, emphasis will be placed on constructing energy-saving 'smart buildings'. The areas devoted to greenery, squares and recreation will be above European standards. A number of very strong projects to establish a transportation network will also be realized.


The two cities to be developed on the European and Asian sides will also gain the metropolis two forests. There are a significant number of mines located south of Kemerburgaz-Kayaşehir and to the north of Şile. Plans are to fill the hundreds of little ponds that have developed in order to create a forested area. According to legal regulations, the top five meters of the ponds will be filled with garden soil and then trees.

AN AIRPORT ON THE SEASIDE

Perhaps one of the biggest surprises that will be part of Istanbul's new face will be the building of a new airport. Istanbul's new airport will be built near the sea in Kemerburgaz. In its surroundings will be hotels and congress centers, transforming the area into a new center of attraction.