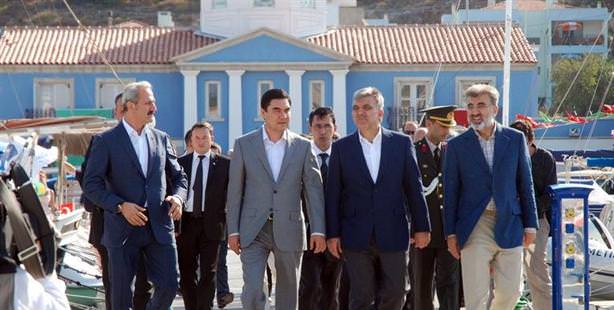 Turkmenistan President Berdimuhammedov, who is planning on investing in a port on the Caspian Sea, was given a tour of the Alsancak Port in Izmir.

President of Turkmenistan Gurbanguli Berdimuhammedov arrived to Istanbul the day prior in order to inspect the Ambarlı Port. Berdimuhammedov, who made Izmir his second stop in Turkey, was greeted by a show of folk dancers from Turkmenistan upon his arrival to the Izmir Airport.

A BRIEFING BY TURKISH STATE RAILWAYS

After the briefing, the Turkmenistan President and his accompanying committee were given a tour of Izmir's Alsancak Port which started off at the cruiser port, where there were two ships docked. The tour continued with a drive through the container port, where Berdimuhammedov and his committee took photographs and video footage.

A SPECIAL PERFORMANCE BY TURKEY'S SURFERS

After completing his inspections, the Turkmen leader met with President Abdullah Gül at the Sheraton Çeşme where the two boarded the same official vehicle to move on to Alaçatı. While visiting the popular windsurfing destination, national surfer Bora Kozanoğlu performed a very special presentation in honor of Berdimuhammedov's visit. The performance consisted of Kozanoğlu and a number of other surfers who did a show involving windsurfs which had both the Turkish and Turkmenistan flags. Gül and Berdimuhammedov spoke from time to time with an interpreter as they watched the performance. After the show, Kozanoğlu joined Gül and Berdimuhamedov where they continued their conversation and the Turkmenistan President presented Kozanoğlu with a gift. After the show, the two presidents then paid a visit to the Çeşme Marina where the Turkmen leader received information on yachts.

Turkmenistan President Berdimuhammedov also met with Minister of Economy Zafer Çağlayan at the Crowne Plaza Hotel where he was joined by a series of investors. The visiting president was greeted in front of the hotel with a Zeybek folk performance by the Hancı Folk Dance troupe. After lunch, Berdimuhammedov met with a number of businessmen, who shared their proposals for potential investments in his country.