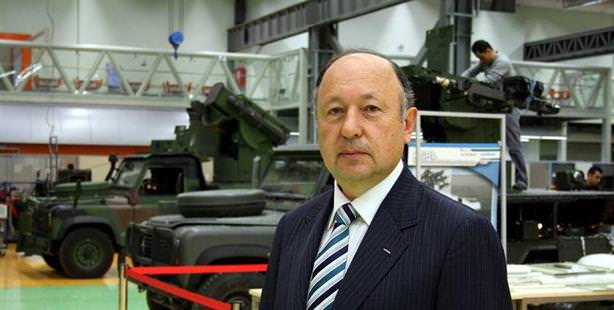 ''Surveillance, motion detection and spotting targets are our main issues. Therefore, we are ready to do this is we are assigned the task."

Ergeneman was responding to questions by an AA correspondent when he said that news surfaced on certain internet websites claiming ASELSAN shares had been sold to Israel was not reflective of the truth. There are no plans on the agenda to sell ASELSAN to a foreign company or country, explained Ergenemon. "No one is considering anything like this, and especially not to Israel."

The Turkish Armed Forces Foundation owns nearly 85 percent of ASELSAN, while the remaining shares are traded on the Istanbul Stock Exchange. Ergeneman stated that nearly half of the shares traded are purchased by foreigners. Explaining that in order to grow and further develop, ASELSAN has increased the amount of shares buyable by foreigners and stated, "Foreigners' stakes in our shares used to be at the 20-25 percent level. This rate has now gone up to 45 percent with a majority of the new buyers being from U.S. pension funds. Therefore, there is nothing to do with Israel. Maybe it was this increase in foreign shares that had to do with the surfacing of misinformation," states Ergeneman.

In answering questions regarding ASELSAN's border security systems, Ergeneman explained that they have made significant progress and at present they are conducting a security trial on a small border in the Southeast.

Explaining that they have developed both mobile and stationary systems in order to secure Turkey's border, Ergeneman stated, "Surveillance, motion detection and spotting targets are our main issues. Therefore, we are ready to do this is we are assigned the task."

Cengiz Ergeneman also says that ASELSAN is also globally competitive when it comes to communications, explaining that a number of nations, including in South America and the Pacific, use ASELSAN devices.

As for when ASELSAN's Radar and Electronic War Technology Center will be in operation, Ergeneman explained that the firm is currently conducting all radar and electronic based work in their site in Macunköy and will not be moving operations to Gölbaşı until March 2014. Ergeneman says the facility, which will be a 76,000 square meter building built on 335 thousand square meters of land, will be the third largest of its kind in Europe.

Ergeneman also explained ASELSAN's efforts to bring Turkish engineers back home. Pointing out that so many Turkish engineers go to the States to study and are then employed in a variety of sectors, Ergeneman explains that they have met with 123 Turkish youths of this caliber since 2006 and 66 of them have already begun working at ASELSAN.

''Plans were to purchase surveillance equipment, including Elektro-Optic Infrared Tactical Surveillance pods, devices that would be used on RF-4E planes, for the Air Force by Israeli firms ELOP and ELTA. These systems are used to receive and transfer high-resolution images shot from long distances. However, the fact that the Israeli government chose to cancel the export licenses of the aforementioned two firms means the project has not been fulfilled. The Undersecretariat of Defense and ASELSAN submitted a notice of contract termination with ELOP and ELTA and the pods will now be purchased readymade," explains Ergeneman We are working on trying to develop these systems within ASELSAN."