Barcelona club flies with the best airline in the world 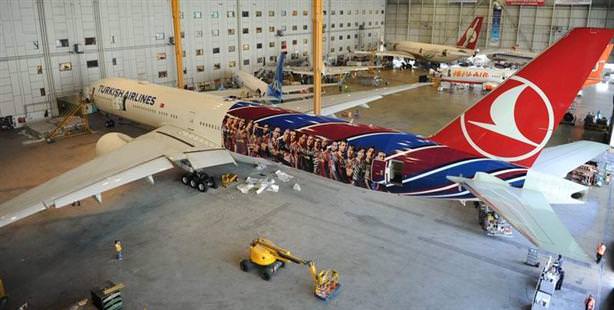 After embarking on a major sponsorship with football giants Barcelona, Turkish Airlines has now set their sights on Messi. According to THY General Manager they have already reached 2.5 billion people over the internet, however they aim to access the entire world’s seven billion people.

Turkish Airlines started off with the grand gesture of sponsoring international-leading football team Barcelona. Manchester United and Euroleague followed. THY has added Kobe Bryant and Caroline Wozniacki as their new brand ambassadors and has now set their sights on famous footballer Lionel Messi.

In an exclusive interview with Turkish Airlines General Manager Temel Kotil, we had the opportunity to discuss THY's sponsorships and new contracts.

Stating that they have set aside a 100 million-dollar budget, Kotil said, "Our sole objective is to sell tickets all over the world. We are now able to access 2.5 billion people over the internet. If there are seven billion people in this world, we want to have accessed all of them."Kotil, who explained that due to their sports sponsorships alone, THY's rate of memorability has increased from one to 30 percent, went on to share with us the firm's future plans.

* Wherever we look abroad, we can see THY's logo. You had responded to criticism, by stating 'We do not waste money on sponsorships.' How much of a budget have you designated for sponsorships?

"We are not spending huge numbers. We can't compete with airlines from Gulf nations for example. In 2005, we started off with five million dollars. That has now been brought up to 100 million dollars. In the past we used to give one to get one. Now we have the opportunity to see ten or even 50 in return. Our target is no longer restricted to the Balkans and the Middle East; we are now looking at the whole world. Our sole objective is to sell tickets to the world. We are thinking large. Sports sponsorships are extremely influential all over the world. It is one of the most effective methods of communication and promotion. It is based on this approach that we have become sponsors for big teams and we are seeing the results."

* When you announced you were going to sponsor the famous footballer Messi you also said that you were talking with other worldwide famous names… Who else is on your transfer list?

"In 2005, we said, 'we are going to be all over the world and we signed on to a number of significant sports sponsorships in order to do so. Our recognition reached a peak with Manchester United and Barcelona. We are expecting a second wave with Messi. We want everyone to know about us, from Africa to North and South America. Of course, this will continue with our new transfers. There are seven billion people in this world and as THY, we want to have touched all of them."

* With sponsorships for Kobe Bryant, Caroline Wozniacki and most recently Messi... Will you no longer be going for team sponsorships and only continue to represent individual sports figures?

"No. We will continue to have both team and individual player sponsorships. We are nearly finalizing our agreement with Messi. We are a hot airline right now, people are interested in us. And the fact that passengers are satisfied is pleasing. This appreciation is reflected on the players we sponsor and through the camera. An airline can never remain local. If it does remain local, it might as well close the door and do something else."

* In 2023, the government aims to present ten global brands from Turkey. With the effects of sponsorships, could THY be one of those brands?

"We actually already are a global brand. We are currently the star of the airline sector and everyone knows about us. However we are not praising ourselves and then lying down. We will continue moving until we reach the point that when an American or Russian wants to fly they ask if THY has a flight. The truth is if a brand is not hot, is not yours and if the customers have complaints, then sponsorships won't work. When a passenger flies with us for the first time, they say 'THY is different.' This is the difference between THY and western airlines. They have become crystallized and frozen.2023 will be a turning point for Turkey. We will be wherever our people want us to be in 2023. We can lift our country up altogether."

THE KOBE FILM WAS APPEALING

* In individual sponsorships, does the sports figure's success or lifestyle affect the brand?

"The Kobe-Armenian issue reflected on us positively. However, the Armenian community in California caused a stir. Our short advertisement was shown for three to five minutes. But life taught us this; 'If there is a hang up then turn it into something positive.' We explained ourselves well. We offered seven flights a week to Los Angeles, and they are all full, which means we turned the situation into a positive. Kobe's commercial was really appealing and his positive efforts were also influential. As THY, we are well received by these stars."

ITS NOW OUR TIME IN THIS WORLD

"A number of large companies in the United States and Europe have become crystallized by dominating the world. However, crystallized thoughts break. That's the situation with the crisis here. Both American and European firms were forced to downsize. Because, now there are us, there are the Chinese. This is a natural process. The flag is switching hands. In sports, in the arts and in commerce, the global center is changing hands and heading from the west towards the east. It's now our turn and these sponsorships are helping this development."

WE WILL EXTEND OUR SPONSORSHIP WITH BARCELONA

* Sponsorship agreements have certain time frames. However, it also takes a few years for them to have an effect on the brand. Will you continue on with your current sponsorships?

* In other words, Barcelona should work with THY, the best in the world…

"Of course, we have been motivating ourselves since 2005 and have always wanted to do something different. They say 'if your friend is good, then so are you', well we have always chosen good friends…"