Turkey is on the rise amongst global arms exporting nations 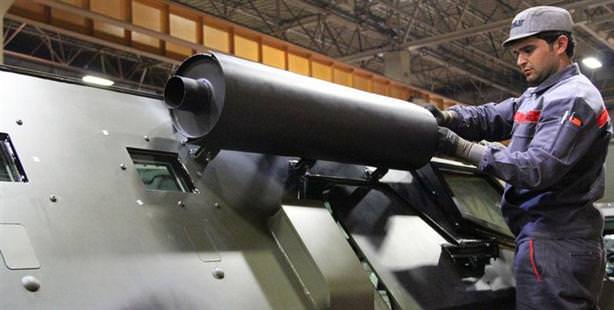 With Turkey’s new venture into the defense industry in recent years, the nation has now placed eighth in a list of worldwide arms sales for 2011. With 800 million dollars in total arms sales, 700 of which to developing nations, Turkey has now left mega global exporters such as Spain and Israel in its wake.

A report on international arms sales conducted by the U.S. Congress Research Department ABD came out with interesting results when Turkey is concerned. While Turkey's defense industry has soared to the 14 billion dollar-level, the nation has also entered the top ten in a list of countries providing global arms exports. In 2011, Turkey was listed as the eighth top arms-exporting nations, and especially stood out due to exports to developing nations.

With the signing of a 700 million dollar contract, Turkey has bumped mega arms exporters Israel and Spain off their thrones. With 8.7 billion dollars in arms exports during the 2004-2011 period, Israel regressed to 11th place in the 2011 list. Israel did maintain its position in eighth place with 800 million dollars in arms sales. As of 2010, domestic production in Turkey's defense industry reached 52 percent. In 2004, this figure was at the 15 percentile level. According to the "2017 Defense Industry" MarketResearch report, in 2016, Turkey's weapons exports may reach up to two billion dollars, while domestic orders will be at eight billion dollars.

According to research conducted by Bilgi University and a report released by Prof. Nurhan Yentürk on military spending in 2010, 35 percent of the sector's revenue was from the private sector, 42 percent was from foundations and 23 percent was realized by state institutions. Members of the Defense Industry Manufacturers Association (SaSaD) raked in 2.73 billion dollars in revenue for 2010 and 634 million dollars in exports.

FEAR OF WAR WITH IRAN

While in 2010, the United States arms sales only reached 21.4 billion dollars, a number of Gulf nations, such as Saudi Arabia, the United Arab Emirates and Oman reached record levels of purchases due to the fear of a potential war with Iran.

Saudi Arabia spent a total of 33.4 billion dollars on arms last year, including purchasing 84 F-15 jets and dozens of Apache and Black Hawk helicopters from the United States. This figure made up half of the U.S.'s record sales figure for 2011.

One of the most influential factors in Turkey's stellar growth has to do with the increasing number of firms and Research and Development spending.

According to Bilgi University's research, Turkish firms began spending on R&D research in 2007. That year, 367 million dollars was dished out for Research and Development. In 2010, that figure nearly doubled at 666 million.

The following is a translation of an article originally written by Barış Ergin.