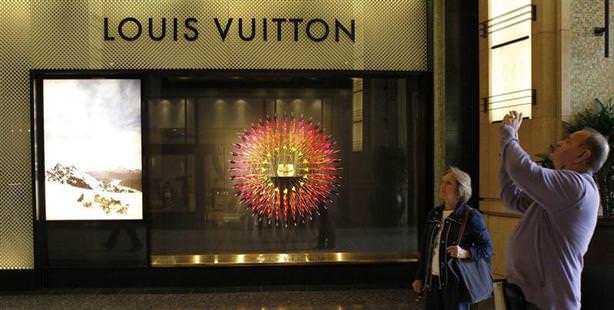 One of the world’s most luxurious brands is soon to join the ranks of other global names embarking on popular new ventures in the food and beverages world. Luxury brand Louis Vuitton is working on bringing his restaurant chain Jones the Grocer to Turkey.

Following the new trend, which has fast become in demand by mega holdings Koç and Doğuş Group, foreign firms are also now beginning to consider jumping in to Turkey's restaurant industry. Worldwide famous accessory brand Louis Vuitton is now one of them.

The Australian-based and Louis Vuitton-owned Jones the Grocer is seeking out opportunities to bring their restaurant to Turkey. Luxurious like its brand name, Jones the Grocer has 15 restaurants in six different countries spanning from Singapore to the United Arab Emirates and next month will be opening its first branch in Kuwait.

Jones the Grocer Director John Manos explains that they have begun working on designating new countries to enter following Kuwait. "In the Middle East, we have operations in Qatar, Dubai and Abu Dhabi. However, we want to expand the brand." Explaining that they especially want to grow in the region, Manos says, "We are seeking out opportunities in Turkey. In addition, Lebanon, Bahrain and Saudi Arabia are also countries that are in our future plans. We will realize all of these projects within the next 12 to 18 months.

Founded in Australia in 1996, Jones the Grocer now operates five locations in the country alone. Jones the Grocer also has two restaurants each in New Zealand and Singapore. Qatar boasts just one Jones the Grocer, while there are six restaurants in the United Arab Emirates. Last year's revenue from the seven locations operating in Gulf nations was 41 million dollars. "In the next five years, we aim to open between 50 and 60 branches in the region in order to bring in a 200 million dollar revenue," says Manos.

A NEW TREND FOR BOSSES

The food and beverages market has practically turned into a competition for investments. Last year Aabar Investment joined Banvit, while Kuwaiti Al Makan purchase shares of Bonfilet. The Qatari Hospitality Development Company has also announced plans to come to Turkey. The greatest interest in the sector amongst Turkish investors has come from the boss of Doğuş Group Ferit Şahenk. Şahenk first stood out with the Doğuş Restaurant Entertainment and Management (D.ream) brand and then went on to purchase 51 percent shares of Şahenk, Nusr-Et, Lacivert and Kiva. Şahenk has also become partners in Kahve Dünyası.

The first branch in Europe

In August, Louis Vuitton's investment branch L Capital Asia, entered into the restaurant sector by becoming a 50 percent partner with the Australian restaurant. The branch they plan to open in Turkey will be their first restaurant in Europe.