Azeri gas to sell to Europe through Turkey 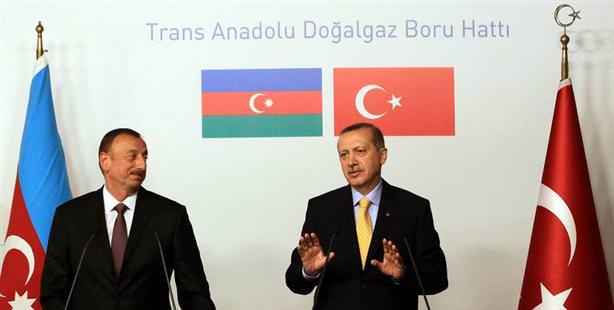 Speaking at a press conference during his stay in Azerbaijan, Prime Minister Recep Tayyip Erdoğan stated that the project started between Turkey and Azerbaijan in order to transport Azerbaijani gas through Turkey to Europe, the Trans Anatolian Pipeline, or TANAP, will make its mark on history.

Speaking at a joint press conference following the Turkey-Azerbaijan High Level Strategic Cooperation Council Meeting with Azerbaijani President Ilham Aliyev, Prime Minister Erdoğan stated, "The machines will begin rolling as soon as possible. This project will be offering a different point in history; it will be making a different mark. This is the era of Azeri gas opening up to Turkey and Europe."

During the press conference, Azerbaijani President Aliyev stated that they will be working on improving visa regulations for Turkish citizens and in the long term plan to lift visa requirements entirely. Aliyev said, "We discussed this issue during our meeting. We will be gradually implementing this process."