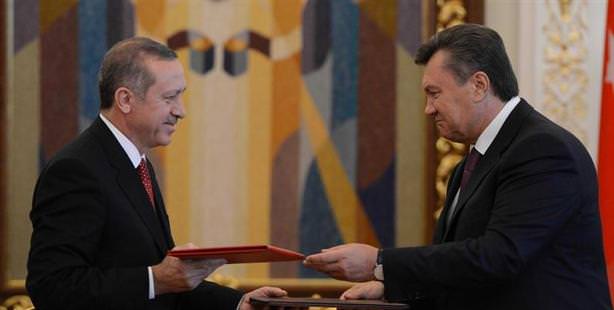 Prime Minister Recep Tayyip Erdoğan has announced that the Free Trade Agreement with Ukraine, for which negotiations are ongoing, will be complete by the end of the year.

Speaking at a joint press conference with Ukrainian President Viktor Yanukovych, Prime MInister Recep Tayyip Erdoğan said, "Our current trade volume is 6.5 billion dollars. Our target is to bring that up to 20 billion dollars by the year 2015. We are currently behind that target and so we need to work harder," said the Turkish Prime Minister.

Erdoğan went on to state that specialists from both nations will be looking into establishing alternative transportation routes over the Black Sea as well as port infrastructure projects. "In the area of energy, our ministers and related departments maintain a close dialogue. Therefore, we believe that we could realize joint projects in this area." A series of agreements were signed during Erdoğan's Ukraine stay involving transportation, railways and maritime routes as well as developing collaborations for SME's.