Interest in the Turkish language on a global rise 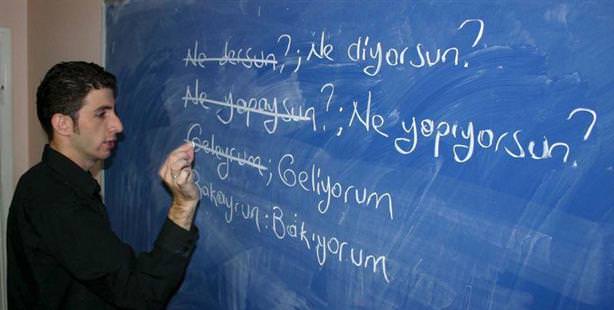 With Turkey’s increased trade volume and economy that rivals some of the strongest countries in the world; Turkish has fast become a global language, and is increasingly high in demand. Turkish courses are being offered all over the world and the language has begun to be included on television broadcasts and internet websites.

The fast development in Turkey's economy and the increase in trade volume is turning Turkish into one of the world's most in demand languages. Turkish Language courses are now being offered throughout Middle Eastern countries, while media barons are pushing the start button to begin broadcasting in the language. And it's not just in the economy world, as a number of universities that send out influential politicians and artists into the world are also now embarking on opening Turkish departments.

India, one of the nations to direct the globe's future economy, is undoubtedly one of the countries most interested in developing Turkish language skills. This interest in Turkish peaked recently following a series of millions of dollars worth of investments in Turkey starting from the global steel giant ArcelorMittal to global chemical brands Polyplex and Aditya-Birla Group, just to name a few. The Jamia Millia Oslamia University, which played an integral role in the nation's independence, being the place where the seeds of Mahatma Gandhi's political outlook were sowed, is now offering a Turkish language program.

According to Vice-Chancellor Najeeb Jung, the 160-student Turkish Language Program at Jamia Millia Islamia receives 400 applications a year and next to Arabic, is the most highly demanded language. Pointing out that the trade relations between Turkey and India is what has increased the interest in learning Turkish, Prakash Sarma, Dean of the Foreign Languages Department states, "India's presence in Turkey is on the rise."

The increased interest in Turkish in India has also been reflected on the communications sector. Turkish has now been added to the mix of languages films are most regularly sub-titled or dubbed in, namely English, Russian and Chinese. Meanwhile, media baron and owner of Essel Group Sunhash Chandra is planning on broadcasting a television station in Turkish. Zee Television of Essel Group, which operates a total 39 television stations, eight of which are news channels, recently started up a television station that broadcasts in Arabic. Next year, Zee TV is planning to offer a Turkish language channel. Dubai's leading language school, the Eton Institute, has also begun to offer Turkish courses. Eton Institute Marketing Director Moaz Khan says, "We did a survey and French, Turkish and Spanish were the favored languages."

Europe's second biggest used machinery firm MachinePoint has now begun to earn money from their vested interest in Turkish. In order to be more accessible to their Turkish customers, MachinePoint has added a Turkish language option on their website. CEO Cesar Rodriguez states, "We have been following the Turkish market for the past two years now and our customer numbers continue to grow, The Turkish market is extremely important for us This is a step we took that will increase our international presence." The significant number of Turkish game-lovers in the virtual world has also directed firms towards offering Turkish options. Marco Matz, the director of the German game company Bigpoint explains that they have now included Turkish to their language options, which solely consists of European languages.

Apple has kept their promise and included a Turkish keyboard in their new sixth operating system (iOS6). When President Abdullah Gül paid a to Apple when he stopped in Silicon Valley during a tour of the U.S. he and his committee was hosted by none other than Apple CEO Tim Cook, the man to take over for the legendary Steve Jobs. On his committee, Deputy Foreign Minister Naci Koru mentioned the fact that Apple's mobile devices do not have a Turkish keyboard option. It seems they may have paid heed to his request.