"Turkey could direct the future" 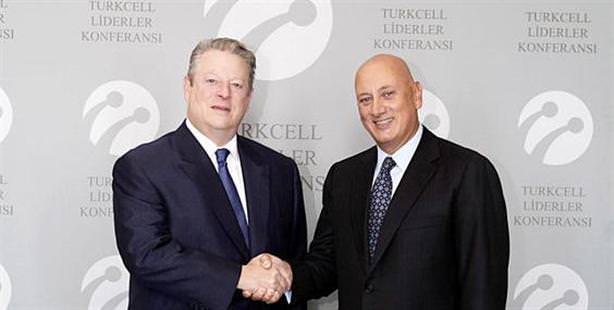 Former US Vice President Al Gore says Turkey will be one of the nations to direct the future.

Speaking as this year's special guest at the Turkcell Leaders Conference was former U.S. Vice President, Apple Board of Directors Member and Senior Advisor for Google Executive Board Member Albert Arnold Al Gore.

Stating that Turkey's significance within the global economy is gradually increasing, Gore emphasized that Turkey carries major potential for renewable energy. "There is a serious rise in per capita income and the country has a bright future. We wish the global economy could be as good as the Turkish economy. The European Union should want to join Turkey."

Pointing out that Turkey will be one of the nations to direct the future; Gore also said that Europe could learn a lesson from Turkey on macroeconomic policy. Gore went on to explain that when he speaks with acquaintances in the Balkans, Central Asia and Greece, they all point out Turkey's regional power and stated, "You could become a global leader"

Explaining that Turkcell is the sole company that has been training on the New York Stock Exchange for the past ten years, Al Gore stated, "Therefore, we are very familiar with Turkcell." Explaining that he himself has a close interest in technology, Al Gore said, "I closely follow what is happening in Turkey. Turkey is actually the place where civilization was born."

KEY TO COMPETITION LIES WITH R&D

Commenting on the importance of Research and Development, Al Gore said that even during times of economic crisis, companies need to place emphasis on this type of work in order to protect their market share le also using the technology infrastructure at hand in the right manner."

The United States politician, businessman, documentary filmmaker and Nobel Peace prize-winner Albert Arnold Gore was born in 1948. Gore served as US Vice-President from 1993-2001 and was the Democratic Party candidate for the 2000 election. After losing the presidential bid, Gore pulled out of politics and began working on projects dealing with global warming.