China Today to be published in Turkey 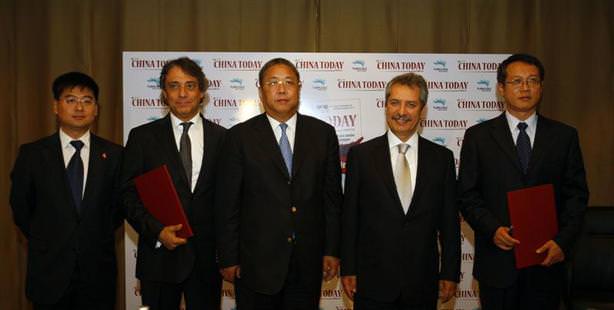 Turkuvaz Media has signed on to a very significant collaboration to bring China’s most widely read magazine China Today to readers in Turkey.

Çalık Holding and the China International Publishing Group (CIPG) signed protocol yesterday in order for China Today to be published in Turkey by Turkuvaz Medya. Thursday's signing ceremony in which Turkuvaz Magazine Group General Manager Levent Tayla and China Today President Hu Baomin signed an agreement to publish China Today in Turkey was held at the Çalık Headquarters and attended by Çalık Holding Chairman of the Board of Directors Ahmet Çalık, China Today Deputy Chief Editor Fu Zhibin, China's Ambassador Gong Xiaosheng as well as other representatives from the Chinese mission.

The initial protocol which began this collaboration between two of China and Turkey's strongest media groups was first signed by CIPG President Zhou Mingwei and Çalık Holding Executive Board Chairman Ahmet Çalık last April in China. Speaking during the signing ceremony, China's Ambassador Gong Xiaosheng stated, "The observations I have made over the past three years I have been in Turkey is that there is a significantly higher potential to further develop relations and cultural ties between the two nations. Out of the 70 million Chinese citizens that travelled abroad last year, only 100,000 or so came to Turkey. Relations between Turkey and China, which span back 2,000 years to the Silk Road, should be stronger and developed further today in the 21st century.

The efforts began by China Today and Turkuvaz Media a year ago has begun to reap fruit. The publication of China Today in Turkish will contribute to developing collaborations between the two countries. I hope that in the upcoming years, there will be other Chinese magazines published in Turkey. I want to especially thank Mr. Ahmet Çalık as well as the other officials at Turkuvaz Media and everyone who has exerted efforts for this collaboration, which has become the benchmark in terms of developing relations and a camaraderie between the two nations."

China Today President Hu Baomin stated, "I am very pleased to be witnessing the printing of our magazine in Turkish today as a result of efforts we began a year ago. We laid the foundation for this relationship in April when Prime Minister Recep Tayyip Erdoğan visited our country with Mr. Ahmet Çalık. Our publication, which is published in Arabic, Russian, English, Spanish, Chinese and now Turkish, has become increasingly more influential worldwide. I believe that with this collaboration, we are awaiting a number of new innovations between the two countries both economically and culturally. The China Today magazine will play a very significant role in strengthening mutual relations. I want to thank everyone who exerted efforts."

Turkuvaz Magazine Group General Manager Levent Tayla also commented on the magazine's release. "In Turkish, to compile a publication, means to bring it all together. We have begun working on compiling the magazine ever since the first meeting we held a year ago. As a result of our continuous efforts, today we see our magazine on the table. This is a reflection of the devoted work of two great magazine groups. In addition to our agreement with China Today, we have also compiled our friendship. To have a friendship of this level has made me just as happy as having the magazine. Hopefully we will sign on to even greater projects in the future."

With its economic, cultural, business world and tourism coverage as well as exclusive interviews, for the past 60 years China Today has provided the best representation of China. China Today is currently distributed in 150 different nations and published in Chinese, Spanish, English, French, Arabic, Germany and Turkish while also has digital versions in six languages. A highly experienced and informed team in economic publications is in charge of publishing China Today Türkiye, which will contribute to the cultural exchange between Turkey and China.

China Today was founded in 1952 by Soong Ching Ling, the wife of Sun Yat Sen a politician who fought for China's independence and is vastly considered to be the founder of the Chinese Republic. The periodical, which was the first English newspaper to be released in China, was originally distributed once every two months under the name China Reconstructs. The magazine was renamed China Today in 1990.