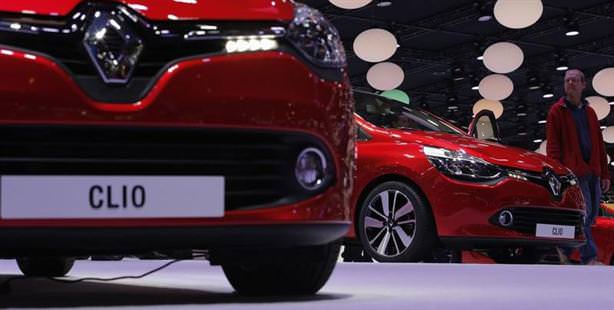 While Europe’s automotive sector is engaged in a serious economic crisis, vehicle models manufactured in Turkey are making its mark on the Paris fair.

A number of models with the 'Made in Turkey' stamp, perceived to be the exit route for brands in crisis, are now going on display for the first time ever at the Paris Automobile Show.

The European automotives market is experiencing one of the most significant economic crises in recent years. In the first eight months of 2012, the market shrank by 6.6 percent. Things are also not going well for Europe's highest vehicle-selling nations. In the first eight months of the year, sales in Italy dropped by 19.9 percent, by 13.4 percent in France and by 8.5 percent in Spain. It is in this pessimistic environment that the vehicle models manufactured in Turkey are making their mark on the Paris Automotive Show.Perhaps the most significant 'Made in Turkey' model, the Clio Sport Tourer, produced in the new Clio 4's production headquarters in Bursa, despite all of the obstacles put forth by former French President Nicholas Sarkozy, was introduced to the world from Paris.

PARIS SHOW TO RUN UNTIL OCTOBER 14

The new Verso, which was manufactured at Toyota's Adapazarı Factory, will also be featured for the first time in Paris. Also on display at the Paris show will be the Fluence, which was produced at Renault's facilities in Bursa, the new Tourneo Connect, the i20 produced by Hyundai Assan in İzmit, and the Fiat Fiorino Trekking model named 'Nitro', which was produced in Bursa and is the work of Turkish engineers and workers and is considered to spur a new concept in light commercial vehicles. The official opening of the show will be on September 29th and it will run until October 14th.

A TURKISH STAMP ON ADAPAZAR'S VERSO

Mehmet Kılıç has a significant stake in the new Verso which will be produced at the Adapazarı facilities. Kılıç received his education in Belgium and is now an electronic engineer. After serving as a vehicle specialist in Toyota's Research and Development department for a majority of his career, Kılıç then served as the first local director for the TME R&D Prototype department. At the end of 2010, he was appointed as Assistant Chief Engineer for the 2013 Verso model. Mehmet Kılıç has officially become the first non-Japanese native and European and Turk to be appointed to the position.

Renault Mais General Manager İbrahim Aybar expresses how excited he is to get to see the new Clio Sport Tourer model in Paris. The model follows the new Clio which will be going on sale on October 10th in Turkey and is considered to be the symbol of the brand's renaissance. Commenting on the Turkish manufactured Clio, Aybar stated, "With the highly productive Energy series motors, the new Clio's CO2 emissions have been reduced by 30 percent and by dropping it down to 83 kg/km can compete with hybrids."

NEW COROLLA TO BE PRODCUED IN TURKEY

Toyota has announced that the new C segment sedan model to be manufactured in the Adapazarı factory will be named 'Corolla'.