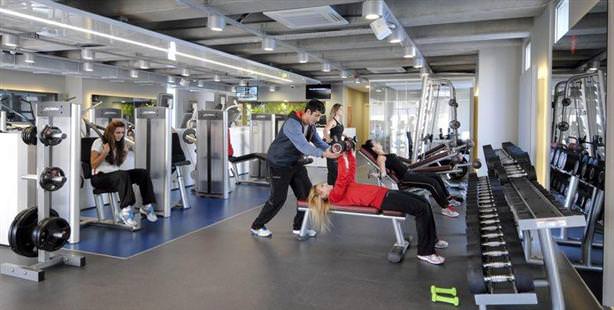 Britain’s Jatomi is planning to open 200 fitness centers in Turkey with a 400 million euro investment. Explaining that they also want to open fitness centers in the east, Jatomi World Chairman Balfour says, “We will be providing 1,000 jobs in 2013.”

Started up by English investor Michael Balfour and his son James Balfour, Jatomi Turkey is planning on opening a series of new branches of fitness gyms and spas. The Jatomi fitness centers, which are in a number of countries in the world, allow members the opportunity to work out with professional trainers. At present there are six Jatomi Fitness and Jatomi Collection & SPA branches in Turkey, however there are plans to bring that number up to 12 by the years' end. Jatomi World Chairman Michael Balfour says their medium term target in Turkey is to open 200 new clubs with a 400 million euro investment.

Balfour talked to SABAH about the Jatomi centers and said, "Jatomi will continue to grow especially in Turkey, but also in Asia, Central and Eastern Europe and South Africa." Emphasizing plans for aggressive growth in Turkey, Balfour explained that the first Jatomi was opened in 2008 in Poland, however now they have a total 52 centers in the Czech Republic, Romania, Bulgaria, Malaysia and Indonesia. "In 2009, we sold Fitness First, which we started up from a single branch in 1996, to an investor for 835 million pounds. At that point, Fitness First had 550 branches in 25 countries. These figures are important in terms of pointing out the level where Jatomi could reach in Turkey as well as in the world."

Balfour shared with SABAH the details of his objectives in Turkey.

* How did you first get into the gym business?
In 1992, I took over a gym which had gone bankrupt and decided to turn it into a chain. My goal was to turn these into clubs that were especially open to the large masses. While I was thinking how pleased I would be to open ten, now I have reached 550. I have one and a half million members in 25 countries and 25,000 employees.

* Where is your place in the sector and how do they differ from others?
We are the first big fitness center group in the world. We operate fitness clubs for the masses.
We offer prices that the majority of the population can afford. And we don't present lesser services than our rivals.

* But you also have a luxurious segment with the Jatomi Collection. Yes, we also have a luxury brand that does differ. The machines and the services are the same. Our dressing rooms and other comforts are what come into play when we talk about luxury. We are trying to establish exclusivity in the services we provide. We will have what we call a first-class lunch service. We will also have a wide menu where we will serve snacks. Concierge services will also be offered at the luxurious clubs.

HEADED FOR DİYARBAKIR AND ADANA

* How much of an investment are you planning on making? How many fitness centers can Turkey take?
We think we may be able to open 100 fitness clubs. Our first goal is to open as many fitness centers as possible in a short period of time. We will have 600 employees by the end of the year. We also use local suppliers. We will also be exporting some of the local resources in Turkey. By 2013, we will have created employment opportunities for 1,000. This will only continue to increase every year.

* Where else would you like to be other than Istanbul?
Foreign investors generally tend to try out whatever products or services they provide in big cities such as Istanbul, Ankara and Izmir. We, however, are looking into cities such as Trabzon, Antalya and Gaziantep, that we feel have great potential.

* Are you considering the east?
Everyone everywhere needs to exercise. As the level of welfare rises, so does the need to exercise. We could say that all cities have this need. Adana, Diyarbakır, Erzurum and Trabzon are all locations that are in our plans. We are looking for space.

THE OBESITY CAMPAIGN INCREASED OUR INVESTMENTS

* You have opened 12 clubs in six months. How many members do you have?
We have now reached approximately 25,000 members. Six of our centers are open; however six are still in the construction stage.

* What do you think of the environment in Turkey?
There are not a large number of fitness centers. This is a large market that can accommodate everyone. None of us could saturate this market on our own. I don't think there are more than 50,000 fitness center members in Istanbul in total.

When we saw the Ministry of Health's "obesity" campaign, we decided to expedite our investments even further. We approve of this sort of action. We hope we will be able to collaborate more. Health care accounts for billions of dollars in loss every year. States need to have a healthy population and we support this. They have been extremely helpful to us here in Turkey in every aspect.

FITNESS OPTIONS FOR EVERY BUDGET

Stating that with Jatomi Collection and Jatomi SPA they were trying to access those who wanted exclusive services, Michel Balfour went on to explain his pricing politics: "With Jatomi Fitness, we are aiming to draw in those who want to work out in a high-quality environment with the latest technology machines in easily accessible locations and at the reasonable price of 199 TL per month
The Jatomi Collection & Spa's are centers that have been decorated with innovative designs. They target those who have limited time to work out and seek exclusive service in a relaxing and invigorating atmosphere. The price to work out in one of these special fitness centers will be 199 TL a month."