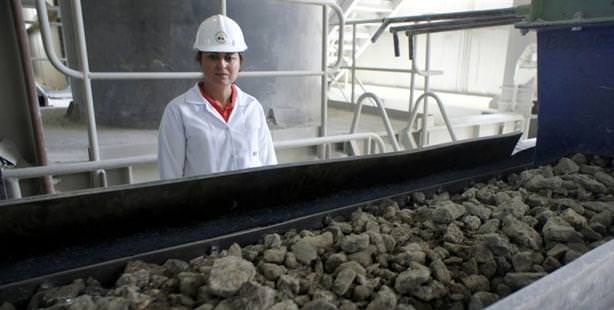 While efforts are ongoing to produce the raw material sodium borohydride used in electric vehicle fuel cells, their by-product will be used to produce high heat transmitting, waterproof and relatively light boron bricks.

Turkey is about to add another investment in the automotive world.
Turkey, a major global boron provider, will be processing the boron procured in order to produce the raw material used in fuel cells for electric vehicles.

With a new investment by the Bandırma Bor ve Asit Factories, the sodium borohydride used for fuel cells in electric vehicles will be produced in Turkey. In addition to the contribution the planned production of 100 tons of the raw material annually will make to the economy, it will also open the door for the production of the fuel cells in Turkey in future years.

In addition to producing refined boron, the factory, operating under Eti Maden Operations, also conducts significant Research and Development efforts. The factory, which has begun producing the sodium borohydride for electric vehicle fuel cells at a pilot facility, is aiming to reach 100 tons yearly. This level of production is expected to bring in four to five million annually.

Meanwhile, negotiations with universities and TÜBİTAK on Turkey manufacturing the fuel cells themselves are still ongoing.

One of the firm's most significant R&D studies has been on the production of a boron brick. Eti Maden Operations Bandırma Bor ve Asit Factories Operating Manager Recep Şekerci describes the work they have done by stating, "We collaborated with a firm to evaluate our by-products. We gave them the by-product to work on and together produced a boron brick which is similar to wall blocks referred to as gas concrete, however it is both waterproof and has a high heat transmitting coefficient."

Emphasizing the fact that they are working on bringing this product to the industry level, Şekerci stated, ''It could be used as an insulation material and has a structure easily conducive to plastering. It is a light brick that will not incur excessive weight on a building. These types of structural elements are extremely important when it comes to earthquakes. Because they are light, they don't bring on extra weight to a structure."

In Kilis, Minister of Science, Industry and Technology Nihat Ergün also made a number of significant statements regarding the future of the energy sector.

Ergün responded to a journalist who asked, "There are 'Alternative Energy Formula Races' being held and you have also promoted a car which operated on solar power and boron by test driving it. Turkey imports 60 percent of its energy. How is the progress going? Will we get to see vehicles operating on boron on the streets soon?"

"Turkey, which has 70 percent of the world's boron reserves as well as major solar potential, continues to increase the number of projects involving boron and solar power daily," states Ergün. "We test drove a vehicle operating on a sodium borohydride fuel cell as part of a project conducted by TÜBİTAK and the National Boron Research Institute (BOREN). The Fuel Cell Vehicle Project was started with the support of Boren in December, 2009."

"The vehicle developed for the project was a entirely domestic production. The vehicle has a 20 horsepower electric engine which was specially designed for this project and was made in Turkey. The vehicle's maximum speed is 80 km/an hour and it is able to go 100 kilometers' distance. The car can go up to 35 kilometers on one kilogram of borohydride. Efforts are ongoing to increase the vehicle's range and speed. We have obtained the patent from the Turkish Patent Institute for the direct production and integration of sodium borohydride fuel cells," stated Ergün.

Lithium ion batteries are used in electric vehicles at present; however these batteries take up excessive space in vehicles and provide low volume energy in relation to the size of the cells. Research shows, that fuel cells using boron have a number of advantages compared to the current batteries used. Amongst the advantages of boron cells are that they have high efficiency, they are quiet, low volume and long-lasting and have significantly low gas emissions. Use of these batteries is not restricted to the automotive industry, as they could also be used in the defense industry. These lighter and more efficient batteries could especially be used to replace the heavy batteries utilized by the Turkish Armed Forces in the field.