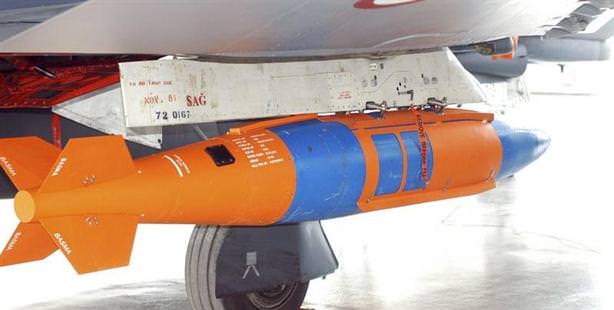 With TÜBİTAK's new smart bomb technology, F-16's will be able to strike from 25 kilometers distance. According to Defense Minister Nihat Ergün, "Turkey is now one of the four countries in the world able to produce smart bombs.”

Turkey's new smart bomb is just one of a series of successful projects embarked upon by the Scientific and Technological Research Council of Turkey (TÜBİTAK) for Turkey's Armed Forces. These smart bombs, which are used on fighter planes, have precision guiding munitions that are able to hit targets at a distance of 25 kilometers. Turkey is now one of four countries in the world that have these defense capabilities.

The precision-guiding munitions were developed by TÜBİTAK's Defense Research and Development Institute (SAGE) engineers as the result of a five-year project. With the R&D completed, these precision-guiding munitions (HGK) been designed to fit on undirected bombs. They provide the capability to determine target coordinates through satellite and the aid of specially developed receptors and have a very small deviation range of up to six meters.

These 'smart bombs' are able to hit the intended target without causing harm to areas outside of the target zone. Fighter aircraft without the smart bomb technology are only able to shoot their target from five to six kilometers' distance, whereas these precision-guiding munitions increases the distance to 25 kilometers with the use of additional wings and special surfacing. This technology ensures fighter jets the capability of being able to complete their task without entering a dangerous zone.

Ergün explains that they will soon be embarking on serial production in order to fulfill the Turkish Armed Forces' need for this smart bomb technology. "The infrastructure for production is nearly complete. The defense industry will begin serial production in 2013 and our air forces will be equipped with 100 percent domestic precision-guiding munitions," states Ergün. The Minister of Defense also explained that the domestic production of this smart bomb technology brings cost down by one fifth, while also containing advanced characteristics. Explaining how these defense industry projects are also creating a national financial advantage, Ergün stated: "With the start of TÜBİTAK's project, the price of these precision-guiding munitions that we imported have also dropped. Once production and sales began prices dropped in further. Therefore, the development of domestic technology also benefits us in this way."