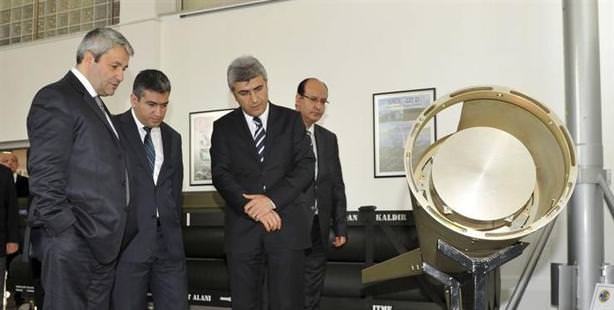 Minister Ergün relayed details on Turkey's work on airborne missiles during a program on TGRT.
"Turkey's Scientific and Technological Research Institute of Turkey (TÜBİTAK) has been working on this project in order to allow for a moving target to be struck from a moving destination.
This is one of the hardest jobs in terms of planning. When you shoot a missile from a plane in motion, it is extremely hard to guide it, because the target is also moving. Our work on guided missiles has given us a significant authority on the matter."

Minister Ergün also discussed another project spearheaded by TÜBİTAK in which the 'unsmart bombs' in Turkey's Armed Forces inventory, which are dependent on the pilot's capabilities and weather conditions in hitting its target will be transformed into 'smart bombs' with 'precision-guiding kits'.
With these 'precision-guiding kits', the bombs, which can be released individually or in bunches, can be shot at 25 kilometers' distance and are able to detect the target on their own. Ergün explained that they have completed the testing phase and will soon be moving on to serial production of these precision guiding kits that will be able to transform practically all of the current bombs in the stockpile into 'smart bombs'.

Pointing out that Turkey has made great strides in precision-guided missiles, Minister Ergün explained that for moving missiles, they are working on the SOM missile, which will be able to hit its target from 240 kilometers distance and can be launched from a plane or ship while in the air or on sea. The SOM missile has the capability to move based on satellite or land maps, and can change directions and be redirected. Explaining that they have completed the 240-km tests on these missiles and have begun serial production, Minister Ergün went on to state:

''We are now working on the SOM's with a 500 kilometer range. At present, we send our satellites elsewhere to be launched, but in ten years time we will have the capabilities to launch them ourselves. Five to six satellites are sent out from one missile. A single missile cannot be leased in order to release a single satellite therefore other countries join in by bringing their satellites as well and they are shot up to orbit from there. This drops rental costs. However the launching technology is a whole other form of technology that we are trying to acquire. In the next ten years, we will be able to make our own satellites as well as take orders from other nations, while also will have obtained the capabilities of being able to launch those satellites."