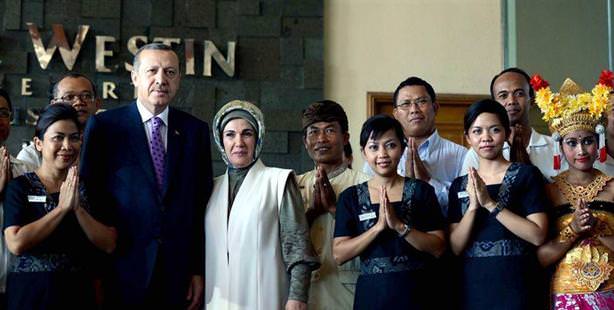 Prime Minister Recep Tayyip Erdoğan states that instead of ruling the world under the pressure of the dollar the IMF should switch to using gold.

During his stay in Indonesia, Prime Minister Recep Tayyip Erdoğan brought up an interesting suggestion for the International Monetary Fund.

Stating that although IMF assistance may appear to be a prescription for some nations, in fact quite the opposite, the fund has often caused serious problems for countries in trouble, Erdoğan asks why it is that the fund uses dollars instead of gold.

Expressing that he doesn't feel it is right for the IMF to act according to one nation's currency, Erdoğan states, "The IMF extends aid on a who, where, how and on what conditions bases. For example, if the IMF is under the influence of any single currency then what, are they going rule the world based on the exchange rates of that particular currency?

Why do we not switch then to a monetary unit such as gold, which is at the very least an international constant and indicator which has maintained its honor throughout history. This is something to think about."

IT IS IMPERATIVE THE IMF AND OECD CHANGE

Explaining that Turkey had to pay a heavy price for the agreement they made with the IMF, Erdoğan stated, "We have not made a stand-by agreement for the past three periods. In April, we will have zeroed out our debt completely and we have no intentions of working with the IMF again."

Prime Minister Erdoğan went on to state: "One would hope that the IMF would help countries in trouble, however at present this is not the case. This is what we need to achieve."