Kurdish businessmen are adamant against terrorism 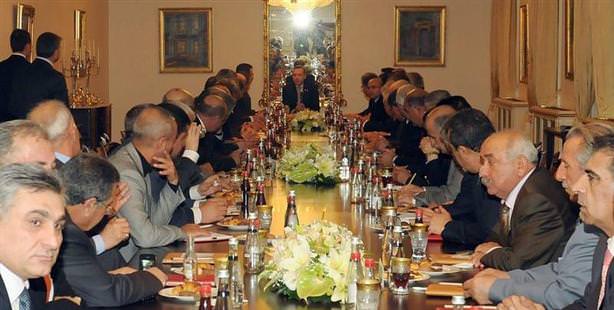 With the initiation of the "Mind over weapons" civilian campaign to curb PKK terrorism, business moguls are now jumping on board in order to establish everlasting peace. Paying a visit to Prime Minister Tayyip Erdoğan, leading businessmen from the east and southeast are getting ready to tackle the issue themselves, beginning with drawing up a roadmap.

The first step of the road map will be for the businessmen to meet with their fellow parties who have representation in the assembly; however they say they are even willing to speak with the imprisoned former leader of the PKK or even with the militants themselves.

Last Tuesday, a group of 45 businessmen and chamber directors as well as commodity exchanges managers including Diyarbakır Trade and Industry Chamber President Remzi Can and Turkish Union of Chambers and Exchange Commodities (TOBB) Rifat Hisarcıklıoğlu paid a visit to Prime Minister Erdoğan.

Emphasizing the need for a solution to be reached in the assembly, the various chairman relayed to the prime minister that they were ready to take on the duty of establishing an environment of peace and security. Pointing out that the first step to reaching a solution will be through deliberations and dialogue, the businessmen emphasize the fact that Turks and Kurds have lived together for thousands of years.

"Turks need to solve this issue on their own. The incentives package has now been overshadowed by the ongoing violence. Meanwhile no one wants to bring hot money into a risky region. Courageous steps that will put an end to the situation need to be taken," were the overall sentiments relayed during the meeting.

'YOU ARE AN OPINION LEADER'

During the meeting, Van Commerce and Industry Chamber Mirza Nadiroğlu explained that parties in power in the past would empty out villages and burn homes, thereby harming the nation versus reaching a solution. Nadiroğlu then stood up to thank Prime Minister Erdoğan by saying, "You have experienced the problems in the region. You are an opinion leader in the region and therefore a great duty befalls you. Speak with CHP, MHP and BDP. They should openly express what it is they propose. Afterwards, let's draw up a road map."

Next week, the aforementioned will be setting up meeting with their party representatives in parliament and will later meet with President Abdullah Gül and Parliamentary Spokesman Cemil Çiçek after which they will meet and prepare a solution report.