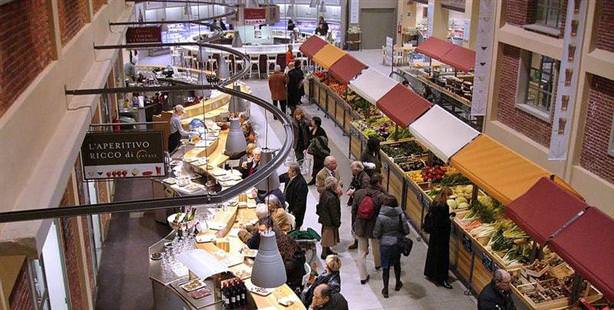 The high-end Italian 200 million-dollar food market is returning to where it was first born. Explaining that he got the idea for the Eataly concept while touring the Spice Market in Istanbul, Oscar Farinetti states, “In 2013, I am returning to the place where everything first began.”

Foreign interest continues to peak in the food and beverage market, the new hobby for Turkish magnates. In addition to restaurant chains from Qatar, Kuwait and Dubai, world-wide famous European brands are also opening up in Turkey. Italy's famous market brand Eataly is the latest arrival. Italian concept brand Eataly will be opening their first Turkey chain in Istanbul.

What makes Istanbul unique for Oscar Farinetti, the founder of Eataly which operates under the concept of both a restaurant and a food market, is the Spice Bazaar. While visiting Turkey as a tourist in 1997, Farinetti had the opportunity to tour the Spice Bazaar. Remarking that, "The East and the West meet at the Spice Bazaar," it was this experience that inspired Farinetti to embark upon creating Eataly.
In 2007, Farinetti, along with his three partners, set off to found Eataly, now a 200 million dollar turnover food hall market specially designed to sell everything from wine to cheese to a variety of preserves, fruits and vegetables while also incorporating a delicatessen.

Farinetti, who designed the Eataly food hall by modeling it after the Spice Bazaar, will be opening a 6,000 cubic square meter branch in Istanbul's Zorlu Center next year. Describing Istanbul as "the place where it all began," Farinetti, whose brand can be found in a variety of geographical locations, spanning from the U.S. to Japan, is now aiming to spread Eataly all over the world.

Where Obama celebrated his 50th...

Eataly's New York store, where U.S. President Barack Obama celebrated his 50th birthday, also draws in a number of Hollywood stars and celebrities from the tabloid world. The New York branch, which is the largest Eataly yet, brought in a turnover surpassing 80 million last year. With branches in five different countries already, Farinetti is also planning to take Eataly to Canada and Brazil. Amongst the nations, Eataly will be expanding to in 2014 are Qatar, the United Arab Emirates and Kuwait.