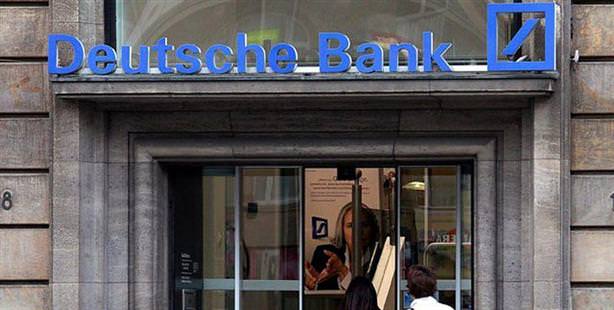 After the Libor scandal, it appears Germany’s Deutsche Bank, which has also been accused of triggering the economic crises in Turkey, has now been dragged into allegations of money laundering. Deutsche Bank Italy’s 80 POS devices providing electronic payment options were blocked at the start of the year.

Accused of triggering the financial crises in Turkey in 1994 and 2001 and then during the global recovery in 2008 of saying, "Turkey may need 120 billion dollars," Germany's Deutsche Bank has been drawn into yet another scandal following Libor. The bank's name has now become entangled with money laundering in the Vatican. It is speculated that the decision made by Banca d'Italia, Italy's central bank, to halt the use of all international credit cards and electronic POS devices may be the result of a significant money laundering operation.

Based on suspicious activity surrounding the 80 electronic payment service points in the Vatican, the Rome Prosecutor's Office decided to take a closer look into the Institute for Works of Religion (IOR), more commonly known as the Vatican Bank's 40 million euro account with Deutsche Bank. It was detected that the Vatican's ten million euro account with Deutsche Bank, which operates the 80 electronic payment service points, was actually circulating 40 million euros. It was then revealed that the Vatican Bank was unable to account for the circulation of the excessive funds.

The central bank stopped Deutsche Bank Italy from providing electronic payment services for the Vatican on Jan. 1 because the Holy See was seen as lacking anti-money-laundering controls and oversight, a move that left thousands of tourists visiting the Vatican museums and gift shops in the lurch, forcing them to use cash.

This most recent incident is not the first money-laundering allegation that has involved the Vatican. Last year, Washington announced that the Vatican was a "potential money-laundering center." JP Morgan's accounts were closed and last year one priest and 14 others were investigated.

S&P announces it will continue to rate Turkey

Failing to reach a deal with the Turkish Treasury, the credit rating institution Standard&Poor's (S&P), has announced they will continue to rate Turkey in the future by issuing an "unsolicited" assessment.

"We are converting our issuer credit ratings on Turkey to "unsolicited" as we no longer have a rating agreement with this sovereign," S&P said in a statement.

The Turkish Treasury recently announced that they would only be working with the Fitch and Moody's credit rating institutions this year.

This is a translation of an article originally written by Yasemin Taşkın.