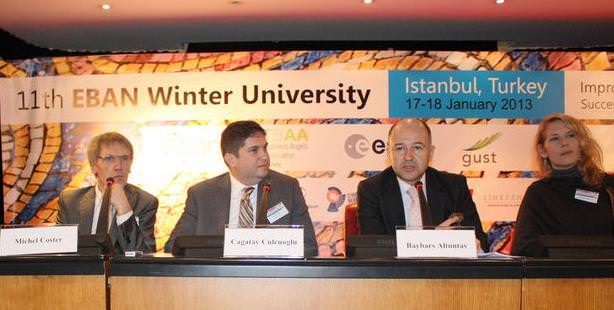 Aktif Bank was the sponsors of the 11th Winter University organized by the European Business Angel Network (EBAN) and the Business Angels Association of Turkey (TBAA) and held on January 17th to 18th at the Istanbul Commerce University.

Aktif Bank General Manager Dr. Önder Halisdemir says that in 2013 one of their main activities will be honing in on 'business angels'. "As a bank, we are one of the founding members of Links Angel BAN. We will be offering all of our support to become a leader in this system in our country," states Halisdemir.
Pointing out that angel investments in the U.S. and the E.U. have reached a volume of 20 billion dollars, Halisdemir emphasizes that the system also works to multiply their competitive strength.

This was the first year that the EBAN Winter University was held in Istanbul. The event, which brought together the world's specialists on angel investments, took place on January 17th and 18th at the Istanbul Commerce University (Istanbul Ticaret University) and also included a number of panels and workshops.

The driving force of the economy…

Aktif Bank General Manager Dr. Önder Halisdemir says, "We could describe angel investments as being an ecosystem which brings those with bright ideas together with the necessary financial resources.
This system provides mutual benefits for both the investor as well as the entrepreneur. By providing opportunities to those with innovative ideas, resulting in the creation of new products, services and business areas, angel investments will be the driving force of the new economy," states Halisdemir.