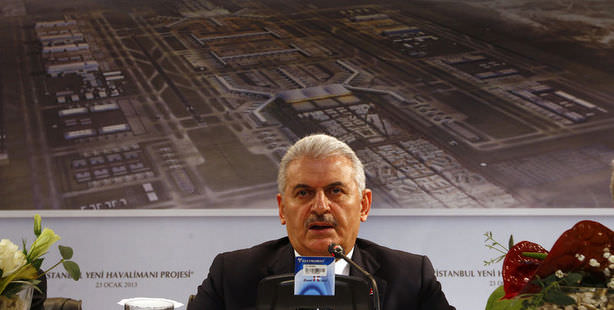 Istanbul will soon be hosting the world’s largest airport aiming to serve 150 million passengers with the date set for the mega-tender as May 3rd. The investment which will cost seven billion euros will be completed within 42 months’ time. According to Transportation Minister Yıldırım, the project will provide 120,000 people with jobs.

The countdown has officially begun for the race to build the world's largest airport in terms of passenger capacity on the European side of the metropolis. Minister of Transportation, Maritime Affairs and Communications Binali Yıldırım announced on Wednesday that the tender for the construction of the massive airport will be held on May 3rd and the winner will be announced the same day. The airport is planned to go into operation 42 months following the tender.

"The tender will be for a 25-year build-and-operate contract with firms bidding on the price they are willing to pay for the annual rent to the State Airports Authority (DHMI)," stated Yıldırım, adding that the total cost of the project, with the exception of financing, is expected to surpass seven billion euros.

According to Minister Yıldırım, the combined passenger traffic of 45 million in the Atatürk Airport and 15 million in the Sabiha Gökçen Airport means that Istanbul transports a total 60 million passengers a year. The operators of the airport, to be determined through the upcoming mega-tender, have been guaranteed 342 million passengers over a period of 12 years. Approximately 80,000 job opportunities will be provided during the initial stage of the investment, including the construction period. Once the airport is fully functional, it is anticipated that the project will have provided 120,000 employment opportunities annually.

At 14 percent growth, Istanbul comes in second for having the highest increase in passenger numbers amongst the world's largest airports. Jakarta's airport comes in first at 14.7 percent passenger growth. In terms of numbers of passengers however, Istanbul is in 30th place.

Once the announcement was made that the new Istanbul airport would be built on the European side of the city, speculation has surfaced surrounding the possibility of Arnavutköy's Akpınar, Yeniköy and Tayakadın villages as potential locations. With details of the planned location for the construction beginning to surface, property prices in the area have skyrocketed. In the past, the cubic-meter price of land in Arnavutköy would sell for between 70-100 TL. Over the past two years however, prices have now reached up to 300-450 TL. Speculation is that over the next few months, property prices in the region may increase by a further 30 percent.