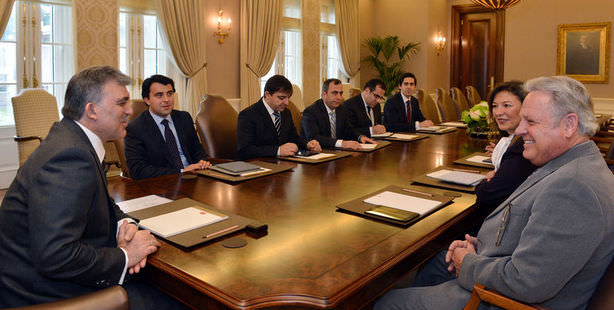 President Abdullah Gül is making a move to ensure Turkey is included in Apple’s top category of nations for early distribution. At a meeting held at Çankaya Palace, Gül had the opportunity to relay his request as well as complaints regarding the Turkish F keyboard to Apple Vice-President John Couch.

President Abdullah Gül held a meeting with Apple Executives and Vice-President for Education John Couch in which he discussed ensuring Turkey is included Apple's initial distribution of products.

The meeting mainly focused on education and Turkey's tablet initiative to provide nearly 15 million tablets to students. However, President Gül also took the opportunity to relay complaints regarding the Turkish F-keyboard on certain products. President Gül recently hosted social media representatives during which he said he would relay their concerns to the Apple executives.

AN E-MAIL TO THE APPLE CHAIRMAN

Prior to the meeting held at the Çankaya Palace in Ankara, Couch sent an e-mail to Apple Chairman Arthur Levinson to inform him of Gül's concerns. During the meeting, Couch told Gül he had relayed his concerns to Levinson and said that they were "close to reaching solutions."

Couch serves as Vice President for Education for Apple which has expressed an interest in Turkey's Fatih Project, which involves providing 15 million tablets to Turkish students. Apple was unable to participate in previous tenders however because there was no operating system or USB entry support. The Android system was used for the past two tenders for the project.

President Abdullah Gül met with Apple CEO Tim Cook during a tour of Silicon Valley last summer. At the time, Foreign Affairs Ministry Undersecretary Naci Koru had mentioned the issue of Turkish keyboards in iPads and iPhones. Apple officials ensured that within a few months they were the only platform to offer Turkish Q and F keyboards; however the F keyboard has defaults.