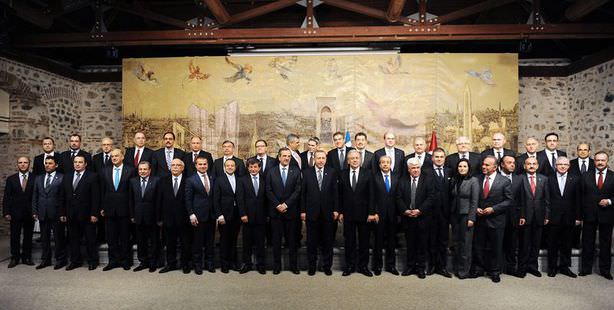 Our neighbors in crisis have debuted their wares in Turkey. Over 100 Greek firms represented at the Turkish-Greek Business Forum held a series of meetings to find partners from their Turkish neighbors. Speaking at the forum, Prime Minister Erdoğan requested that joint trade between the two nations be brought up to ten billion dollars by 2015.

Nearly 700 businessmen, 102 of which were from Greece, attended a Turkish-Greek Business Forum coordinated by the Ministry of Economy in conjunction with the Foreign Economic Relations Board (DEİK) and the Turkish Exporters Assembly (TİM). The Turkish businessmen in attendance of the forum, in which both Prime Minister Tayyip Erdoğan and visiting Greek Prime Minister Antonis Samaras delivered opening addresses, showed significant interest in Greek energy, real estate and tourism projects.

Delivering the opening address, Prime Minister Recep Tayyip Erdoğan called on attendants of the forum to bring the joint trade volume up to ten billion dollars by the end of 2015. Announcing that despite the economic crisis, bilateral trade has increased over 100 percent in the past ten years, Erdoğan spoke out to the crowd of businessmen by prompting, "We will lead the way and you will take the steps." Pointing out that the economic struggle suffered by Greece will undoubtedly have its effects on neighboring Turkey, Erdoğan said, "We are ready to collaborate with Greece in any way in order to ensure the effects of the crisis are swiftly overcome."

GREECE WILL BE EXPANDING THE VISA PROCESS FOR TURKS

Greek Prime Minister Antonis Samaras addressed the increasing tourism between the two nations and told participants, "We want more Turks to come to Greece. In order to allow this to happen, we will be further expanding our visa-issuing process at border gates for Turks." Samaras also said that Turkish and Greek firms could join forces by entering third world countries together.

This is a translation of an article originally written by Barış Ergin and Mesut Er.