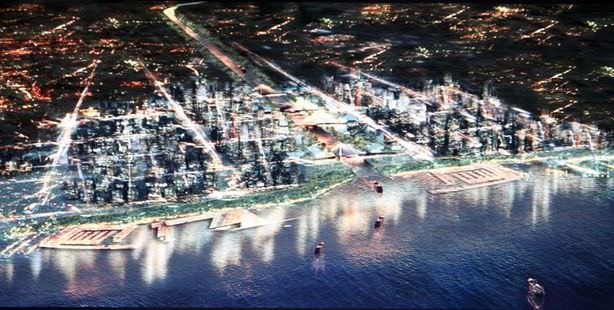 The first investment in Prime Minister Erdoğan’s innovative Channel Istanbul project has begun. With a one-billion-dollar investment, Uzay Enerji will be setting up a natural gas power station in order to supply the electricity needs for the 500,000 residencies and the city’s third airport, planned to be built as part of what is regularly referred to as Erdoğan’s ‘crazy project’.

Channel Istanbul, considered to be one of Prime Minister Recep Tayyip Erdoğan's 'crazy plans' has already reeled in a billion dollar investment before it has even commenced.

Turkish and Gulf region investors are joining forces in order to embark upon providing the necessary energy for the fruition of the outstanding 'Channel Istanbul' project, which includes the development of 500,000 residences. Investors have now made an initial move to build a natural gas power station to support the project's electricity needs. One of the architects of the project, Özgül Group Chairman Dr. Ömer Faruk Özgül says that a newly-formed company for this purpose will be investing one billion dollars on a power station that will be able to produce 200 megawatts of electricity annually.

Özgül, says that in order to provide for the electricity needs of mega projects such as Channel Istanbul and building a third airport, they need to get to work now, which is what they are doing by embarking on building a natural gas plant. According to Özgül, who states that the firm Uzay Eneri was founded for this very reason, in 2012 the project will go into an investment phase which will conclude in two years' time.

Dr. Ömer Faruk Özgül also says that Gulf funds are showing an interest in the project, "The power station we will be building will be enormous. We have determined a location near the Akpınar and Kemerburgaz region. It will be close to the third airport. The electricity needed for the mega Channel Istanbul and airport projects will be provided from this," states Özgül.

WE ARE SPECIALISTS IN THE DEEP SEA LINE

Ömer Faruk Özgül explains that their main job is electricity; however they have also operated in the ship-building sector. "We made a collaboration agreement with a Romanian firm that specializes in deep sea energy lines," states Özgül going on to explain that they have worked as authorized consultants for a number of holdings' energy projects.

Ömer Faruk Özgül says that Energy and Natural Resources Minister Taner Yıldız runs the ministry with the precision of a technocrat which is why the problems in the sector have unraveled. According to Özgül, the ministry is run according to the Ohm's Law, the physics law in play in the energy market.

Ömer Faruk Özgül says, "The Ohm's Law states that there is a rate of connection between voltage, flow and resistance. If the balance is disrupted in this rate then the circuit closes. Therefore, the ministry is run by the mentality of a technocrat." According to Özgül, this has led to a number of positive results in the sector. Özgül also says that the government has offered important incentives to the energy sector and that in wind energy alone, there will be a five billion euro investment made within the next five years.