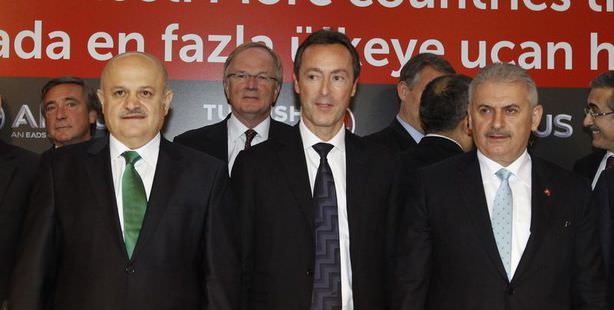 Turkish Airlines has placed the highest order ever before seen in Turkey’s history of civil aviation by signing with Airbus to purchase 117 planes. Transportation Minister Yıldırım's announcement that they want to move into joint production with Airbus, made its mark on the signing ceremony.

Turkish Airlines (THY) has signed on to the single largest plane purchase deal ever before seen in the history of Turkey's civil aviation sector.

A number of politicians were also on hand at the signing ceremony held Wednesday, exhibiting high interest in the deal which has Turkish Airlines paying out 13.5 billion dollars to Airbus for an order of 117 new planes.

It was during the signing ceremony that Transportation Minister Binali Yıldırım proposed the joint production of planes to Airbus President Fabrice Bregier. "You better be quick, we want to see a comprehensive agreement from your firm in this venture," said Yıldırım.

Speaking at the signing ceremony, THY Executive Board Chairman Hamdi Topçu announced Turkish Airlines' goal to become one of the world's top ten airlines and said, "With this deal, THY is taking yet another significant step towards becoming the biggest airline in Europe."

Hamdi Topçu explained that with the inclusion of the planes ordered by Airbus, by 2020 the airline will have a fleet of 375 airplanes. Topçu also said that with the planes that will be added to the rotation this year they will be able to serve 46 million passengers, however he added that by 2020, they aim to have reached 90 million.

'WE ENVY THY WHICH IS GROWING FASTER THAN WE ARE'

Airbus President and CEO Fabrice Bregier commented that this deal marked the turning of a new page with THY and stated, "Turkish Airlines is growing faster than Airbus, which is something we are envious of." Bregier also expressed that they are closely following the developments regarding the building of a third airport in Istanbul and said, "With the new airport and the increase in air traffic our relations with THY will only grow stronger."