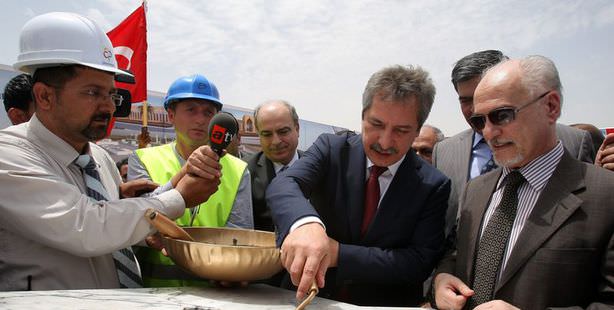 Çalık Enerji has completed the construction of a 1,250 megawatt power plant in Khairat, which will provide for one fifth of Iraq’s total electricity consumption.

Çalık Holding has completed an investment in Kerbala's Khairat region by building a 1,250 MW power station, which is one of the largest of its kind in Iraq. Iraqi Deputy Prime Minister Hüseyin Şehristani says, "This power station will lighten up the Fırat region."

Çalık Holding has completed a mega investment of constructing a 1,250 MW capacity power station in Khairat, Iraq. This new power station will provide for the one fifth of the entire electricity used in Iraq, is one of the biggest power plants in the nation. This power station, which was constructed by Çalık Enerji over the course of two years, is widely considered to be one of the most significant infrastructure projects in the ongoing reconstruction of Iraq.Speaking at the opening ceremony Iraqi Deputy Prime Minister Hussein al-Shahristani announced that the power plant will be providing electricity for the entire Firat region. During his address, Al-Shahristani stated, "I want to thank everyone who invested and exerted efforts on behalf of this project. I wish those that preceded could have been more like this. The power station will be providing electricity through the grid as of the fifth month of this year. The four turbines will also begin to operate next month."

ELECTRICITY PROVIDED FOR A POPULATION OF FIVE MILLION

AN ENVIRONMENT OF WELFARE

Speaking at the opening for the Khairat power plant in Iraq's Karbala region, Çalık Holding Executive Board Chairman Ahmet Çalık thanked Iraqi Prime Minister Nouri al-Maliki, Deputy Prime Minister al-Shahristani Aftan and Governor of Karbala Amal al-deen Al-Hir for their support. "These steps we are taking in order to ensure the welfare of the Iraqi public and these major investments and these great efforts we are exerting in order to rebuild Iraq are extremely significant. These efforts will not only be appreciated by Iraq but they will also be responded to with praise and gratitude by everyone in the region that will be positively affected by the peace and welfare that will be established," stated Çalık.

Ahmet Çalık pointed out that in the short period of two years' time they have successfully managed to reach a level of providing Iraq electricity. "In May, we will also be completing the construction of the 750 megawatt Ninova Natural Gas Circuit Station which means we will be providing a total 2,000 megawatt capacity of electricity for the Iraqi nation. We are extremely honored to have taken on both of these investments," said Çalık.

'WE WILL CONTINUE TO WORK TOGETHER'

Karbala Governor Amal al-deen Al-Hir also delivered an address at the opening ceremony during which he thanked Çalık Holding. "Those who built this station will be remembered with gratitude by everyone in the region. We will continue to work together. We also want to offer our gratitude for the contribution to the employment of our region's public through this investment," stated Al-Hir.