Turkey is way ahead in the investment league 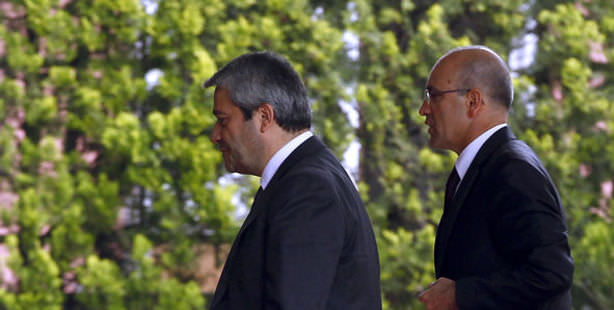 Two state ministers say that if South Cyprus’ EU test fails it could work to Turkey’s benefit. Industry Minister Ergün stated, "With its stability, Turkey is a country of opportunities,” while Finance Minister Şimşek delivered the message, “We have passed the stress test.”

With the ongoing resolution process, developments such as the establishment of an environment of peace amongst society and the ongoing incentives system, Turkey has fast become a safe and opportunity-filled market in the eyes of both domestic and foreign investors.

With financial opportunities on the rise, Turkey's organized industrial zones are already filled to the max. The number of investors that are turning their sights on Turkey as a result of the nation's rating upgrade by international ratings institutions is also fast on the rise. This outlook places Turkey in the investment league of major global players.

THERE IS A SECURITY DEPRESSION IN THE EU

Science, Industry and Technology Minister Nihat Ergün emphasizes the fact that with the performance exhibited in recent years, the perception prevalent throughout the world of Turkey being 'a safe harbor' is now becoming even stronger. Pointing out that the crisis management performance displayed by the EU when it comes to the example of Southern Cyprus has damaged the environment of security, Ergün stated, "The issue of security in Europe, which was unable to rectify the banking system, is deepening even further. Due to the fact that the money injected into the economy is not reaching the real sector, industrialists or consumers, these countries are not growing. Like the example of South Cyprus, the harsh solution methods implemented by banks such as confiscating assets have frightened investors," said Minister Ergün.

'WE ARE THE REGION'S CENTER'

Minister Ergün also emphasized that Turkey is drawing attention with its stable growth, as the EU loses security and said that the Turkish financial system has been tested with a number of crises in the past. Ergün went on to state: "While a number of nations are unable to even perceive their tomorrows. Turkey has embarked upon a Mid-Term program. Investments from all over the world are on the rise. The capital that will be coming in the mid-term will increase even further. In addition, Turkey will be the center for operations in Middle East and African nations."

'THE DOOR THAT OPENS UP TO THE WORLD'

Minister Ergün went on to explain that Turkey's incentives system is of the likes rarely come across in the world and highly facilitates both domestic and foreign entrepreneurs. "When taking into account regional developments, Turkey is a nation that is a center of attraction. To invest in Turkey is a strategic step from an entrepreneur's perspective. Turkey is a door that opens up to the whole world," said Ergün.

Mentioning the fact that a number of banks have gone under in nations that appeared to be solid, Finance Minister Mehmet Şimşek said, "In Southern Cyprus assets have been seized. There used to be the perception that it was a safe harbor and a tax paradise. However, their money has gone under. In OECD havens, tax royalties have come to an end. While a number of banks all over the world are going under, Turkey has successfully passed the stress test," stated Şimşek.

'THE RESOLUTION PROCESS WILL RESULT IN ECONOMIC GROWTH'

Explaining that the ongoing resolution process which is being conducted with full determination by the state, will have a positive effect on both Turkey's economy as well as its credit rating, Minister Şimşek stated: "This process will push Turkey to a greater output. If the resolution process is successful then the differences will decrease. Turkey will have closed the gap with Germany. The process of equalizing Batman and Bursa and Turkey with the United States and Germany will gain speed. This ongoing process has been a good surprise for international investors as well."