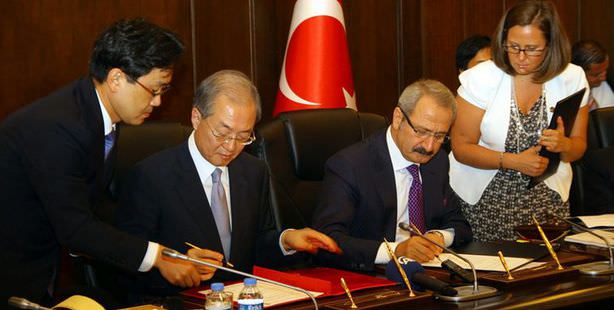 Turkey embarks on its first Free Trade Agreement (FTA) with an Asian nation taking effect today with South Korea. The agreement is anticipated to increase South Korean investments in Turkey. Turkish-Korean Business Council Chairman Ali Kibar states, “We will especially begin to see investments in heavy industry sectors such as automotives and energy.”

The Free Trade Agreement between Turkey and South Korea takes effect today. The target is to increase the current 6.2 billion dollar foreign trade volume up to ten billion dollars in the short term.
The Free Trade Agreement (FTA) signed with South Korea on August 1, 2012 by Turkish Minister of Economy Zafer Çağlayan and South Korean Minister of Trade Bark Taeho in Istanbul marks the first bilateral trade deal Turkey has embarked on with an Asian nation.

Now the two nations are pulling up their sleeves to pursue investment endeavors. Kibar Holding Executive Board Vice-Chairman and Turkish-Korean Business Council Chairman Ali Kibar notes that from here on out Koreans will be increasing their presence in Turkey. "The number of purchasing committees will increase. At present there are four or five Korean automotive sub-industry firms that have begun working on investing. There will be even more firms coming in this sector," states Kibar.
Kumho President comes to Turkey

Prior to the start of the free trade agreement, South Korean firms had begun to hold deliberations with Turkish firms in an effort to seek out new opportunities. Park Chan-gu, the President of Kumho Petrochemical, which with 40 billion dollars in active funds is one of the nation's top ten groups, has also arrived to Turkey. In an announcement released by Kumho it was stated, "Our trade with Turkey will increase by 130 percent this year."

WHAT WILL THE BILATERAL FREE TRADE DEAL BRING?

With the Free Trade Agreement between South Korea and Turkey over the next ten years on a gradual basis 90 percent of customs duties will no longer be imposed in all tariff categories. As of today, in which the bilateral trade agreement takes effect, South Korea will be rounding off 80 percent of customs duties while Turkey will round off 65 percent in all tariff categories. Turkey will abolish tariffs entirely on all industrial products imported from South Korea within the next seven years at maximum.