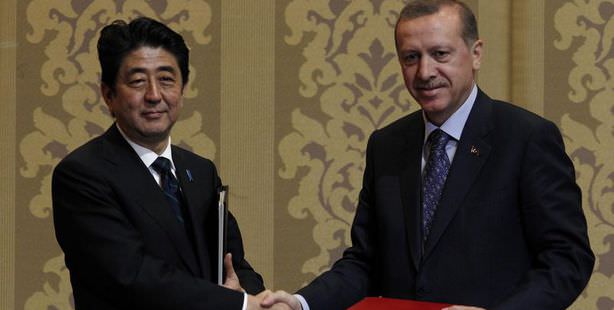 Turkey signed an agreement with Japan and France on Friday for the construction of Turkey’s second nuclear plant in Sinop.

Japan's Mitsubishi Heavy Industries Ltd and Itochu Corporation, with France's GDF Suez, will build Turkey's second nuclear power plant at an estimated cost of $22 billion under an agreement signed by Prime Minister Recep Tayyip Erdoğan and his Japanese counterpart Shinzo Abe on Friday. The first unit of the power plant to be built in the Black Sea coastal city of Sinop will go into operation by 2023. With the energy to be produced by this 4,800 megawatt nuclear power plant, coupled by the 4,800 MW power to be generated from Turkey's first nuclear power station, a total 30 million homes will be provided electricity.

Russia's Rosatom will build Turkey's first nuclear power station in the Mediterranean province of Mersin's Akkuyu district. The $20 billion plant is due to start construction in mid-2015, and the facility is expected to start producing electricity in 2019.

Prime Minister Recep Tayyip Erdoğan and visiting Japanese Prime Minister Shinzo Abe signed an intergovernmental agreement for the build of Turkey's second nuclear power plant in Sinop. The price of the electricity to be generated from this facility will be 12.35 cents/kwh, which is slated to be even lower than the electricity produced by the nuclear plant in Akkuyu.

The host country is planning to complete the agreement within the next six months. The bulk of the project will be financed by Nippon Export and Investment Insurance (NEXI), Japan's export credit agency, and French credit insurer Coface. The firms will also carry out a site analysis for where Turkey's third planned nuclear power plant could be built. If the two nuclear power stations were to be in operation today they would produce approximately 80 billion kilowatt-hour electricity. In 2023, electricity demands are predicted to rise to 500 billion kilowatt-hour. Therefore, from that point of time and on, Turkey will be supplying six percent of its electricity needs through these two nuclear power stations.

Energy specialists say that there are 30 million residences in Turkey that are subscribers and that these two power plants will be able to supply the electricity needs for all of these homes.

ELECTRICITY TO BE PROVIDED IN 2023

"We are hoping to have the nuclear power station building project to be completed in less than ten years. This is a 22 billion dollar investment. This deal is also the first step for Turkey's third nuclear power plant, which will be a Turkish engineering effort," Erdoğan said at the signing ceremony. The Prime Minister also said that they are hoping to benefit from Japanese technology in the construction of the Izmit access project as well as the bridge to be built on the Çanakkale Strait.

Commending Turkey at the Turkish-Japanese Business Council, Japan's Prime Minister Shinzo Abe stated, "We have been witnessing in astonishment and admiration the growth you have achieved over the past ten years." According to the deal, the first Turkish reactor is slated to come online by 2023, with a fourth and final one operational in 2028.

The French press devoted significant press to the deal signed on May 3rd. Headlines qualified the signing as a "historical agreement", and wrote that it was a sign that the tension in Turkish-French relations has come to an end.