We are staging a silent revolution with nuclear power 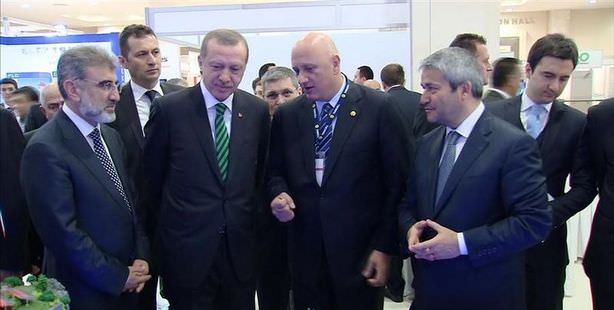 Prime Minister Tayyip Erdoğan says that Turkey’s nuclear efforts, which he qualifies as a “silent revolution,” will allow them to stop importing 7.2 billion dollars worth of natural gas.

Speaking at the opening of the International Istanbul Smart Networks Congress, Prime Minister Recep Tayyip Erdoğan said that with the nation's nuclear power plants, Turkey will be able to overcome the need to import 7.2 billion dollars worth of gas. "We are staging a silent revolution," stated Erdoğan. "Our nuclear energy will not be substituting energy derived from the sun, wind and water, it will be replacing what we have been forced to import. In a world in which energy is used as a force against others, we are obligated to transition to a system of energy-sharing," said Erdoğan, who went on to explain: "The 130 billion kilowatt-hour electricity consumption of 2002 has now reached 240 billion. Our previously 300 power plants are now up to 743. Our installed power has increased from 32,000 megawatts to 58,000. We now have natural gas in 71 of our provinces."

A THIRD NUCLEAR POWER PLANT IS ON THE WAY

Just last week, Ankara awarded a 22 billion dollar deal to a Japanese-French consortium to build its second nuclear power plant in Sinop, while Turkey's first nuclear power plant is being built by Russia's Rosatom in Mersin province. Both deals include training for Turkish engineers, with the agreement with Japan involving establishing a university to provide nuclear education.

Commenting on plans to build a third nuclear power plant, Prime Minister Erdoğan expressed that Turkey will have more of a share in the building and operating of the third nuclear plant and said, "We may be building it ourselves. We are already training engineers. Compared to ten years ago, Turkey is now nearly producing double the amount of electricity. We will build the third nuclear plant." Erdoğan also mentioned the recent $22 billion tender that went to a Turkish consortium to build and operate a third airport in Istanbul and stated, "With God's help, Turkey's capital could allow for us to build our own nuclear power plant. We now have the potential and the power."

Minister of Energy and Natural Resources Taner Yıldız also said that after obtaining two eight-unit nuclear power plants, Turkey will have reached a point of being able to build their own domestic nuclear station. "At first it may seem really out there, however this is how Turkey has achieved a number of goals. Within 20-22 years, South Korea also reached this target. I am of the opinion that with our industry this is something we will be able to achieve," stated Yıldız.

WE USE PLANES AND CARS

Prime Minister Erdoğan also assured that they would be taking every precaution when it comes to safety and asked the question, "Are we not supposed to use planes and cars because there might be an accident