High-level committee to be established for U.S. Free Trade Agreement 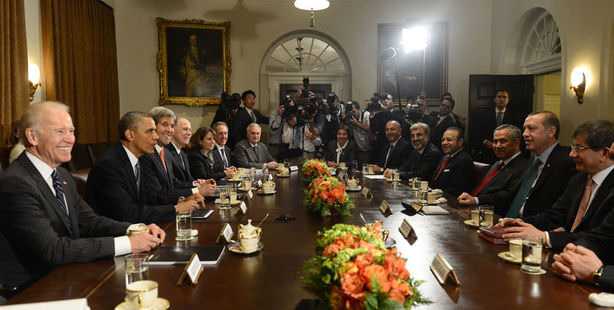 Trade was high on the agenda of the highly anticipated meeting held between Prime Minister Erdoğan and U.S. President Obama at the White House on Thursday. Obama told reporters following the meeting, “We have agreed to keep expanding trade and investments and therefore we will be creating a new high-level committee.”

Perhaps one of the most important items Prime Minister Recep Tayyip Erdoğan intends to tackle during this historic trip to the United States is pushing for Turkey's involvement in a proposed free trade pact between the United States and Europe. If left excluded from the Free Trade Agreement, the deal could harm Turkey's commerce with Europe and the United States and hamper its ambitions to become a top ten economy over the next decade. During the meeting of mutual delegations which included Ahmet Davutoğlu, Deputy Prime Minister Bülent Arınç, Economy Minister Zafer Çağlayan, European Union Minister Egemen Bağış, Defense Minister İsmet Yılmaz, Energy, Natural Resources Minister Taner Yıldız and AK Party Deputy Chairman Numan Kurtulmuş, the possible worst and best economic scenarios were shared with the U.S. delegation which had U.S. President Barack Obama sitting next to Vice-President Joe Biden and Secretary of State John Kerry. The Turkish delegation took the opportunity to present the potential risks the deal poses for Turkey in three different scenarios. The end result was in Turkey's favor as the U.S. agreed to form a new high-level committee and will have Turkey signing on to the Transatlantic Trade and Investment Partnership agreement with the United States.

THE THREE SCENARIOS WHICH PERSUADED THE U.S.

Turkey has prepared a comprehensive study of three scenarios the nation will be faced with if not included in the Free Trade Agreement to be signed by the United States and the European Union. These three scenarios, broken down into the "worst", "normal" and "good" effects the FTA could result in, was relayed by Turkey's delegation to their U.S. counterparts.

Washington and Brussels are expected to begin talks on the proposed trade pact in July and hope to finish in one to two years. If successful, the final agreement would cover half the world's economic output and about a third of global trade. Turkey has a customs agreement with the European Union under which a third country signing a trade deal with the EU gets automatic access to Turkish markets, but Turkey does not get the same reciprocal benefit for its exports.

Amongst other topics brought up at the meeting was the pipeline Turkey plans to construct in northern Iraq which the central Iraqi administration is not in favor of. The Turkish delegation explained that exporting further natural gas and oil was a requisite for normalization in Iraq and stated that establishing new pipelines is therefore of vital importance .

WE WILL EXCEED 20 BILLION DOLLARS

After holding a nearly three-hour-long meeting, Prime Minister Recep Tayyip Erdoğan and U.S. President Barack Obama attended a joint press conference at the White House Rose Garden. During the briefing, Obama stated, "We have agreed to keep expanding trade and investment. Over the past four years, our trade has surged and U.S. exports to Turkey have more than doubled. As the United States pursues a new trade and investment partnership with the EU, I want to make sure that we also keep deepening our economic ties with Turkey. So we're creating a new high-level committee that will focus on increasing trade and investment between our two countries and will help fuel Turkish innovation. And the progress that Turkey's economy has made over the last several years I think has been remarkable and the Prime Minister deserves much credit for some of the reforms that are already taking place."

Prime Minister Erdoğan stated, "Bilateral economic relations between Turkey and the United States have to be improved, and we both have this aim. Ten years ago, our trade stood at $8 billion; at the moment, trade stands at $20 billion. But this amount is still not sufficient. We have to increase the amount of trade between our two countries.

Bilateral economic and trade relations between Turkey and the United States will continue to develop. And as we carry forward with these efforts, we need to strengthen this relationship with free trade agreements and other agreements. And I can tell you that as leaders of our nations we have the will to continue to develop our economic relations."

This is a translation of an article originally written by Mehmet Ali Berber with wires.