There is no business for companies that work with the Greeks 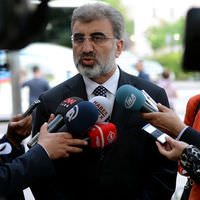 During his trip to the United States, Prime Minister Erdoğan made his message clear on topics ranging from Cyprus to Northern Iraq. “Both sides have equal rights to the natural gas in Cyprus. In the area there is no business for companies that work with the Greeks” Said Energy Minister Taner Yıldız.

Turkey once again showed its decisiveness on the Cyprus issue, this time from the United States. The American authorities questioning Turkey's authority in its searches for natural gas in the Mediterranean were given the message that "That both sides are not defined as having equal shared rights to the natural gas as well as equal distribution of the profits is not legitimate," by Energy Minister Taner Yıldız. The Turkish council also made it known that Turkey would not contract companies that work together with the South Cyprus Greek government.

Another topic at hand in the talks was the importing of liquefied natural gas desired from the United States (LNG). Defending the high prices at which the U.S. sells natural gas to Turkey by stating that they will be increasing domestic prices as well, the United States stated that short term LNG sales were impossible. "Our demand is still valid. They just stated that due to other extraneous situations it would be difficult for them to provide us with LNG in 2016," said The Minister of Energy and Natural Resources Taner Yıldız.

Energy was amongst the topics discussed during Prime Minister Recep Tayyip Erdoğan's trip. Mentions of partnerships with the Turkish Petroleum Anonymous Partnership were also made in the talks (TPAO). It was announced that the TPAO (Türkiye Petrolleri Anonim Ortaklığı) would soon make an important statement about forthcoming endeavors with a number of American mega petrol firms. In an announcement on the topic, Energy Minister Yıldız mentioned that meetings involving joint searches for oil would soon be taking place.

THERE ARE 19 COUNTRIES IN NORTHERN IRAQ, WHY SHOULDN'T WE BE?

Taner Yıldız, made it known that Northern Iraq was another key issue during the discussions. Making it known that Turkey is involved in both Northern and Southern Iraq Yıldız stated that, "We are engaged in projects in Basra, Siba, and Mansuriya. These are topics that benefit both Iraq and Turkey. If there is no difference between the north and the south, then we will also partner up with Northern Iraq as well." He alsopointed out that reaching an agreement with the north does not go against the nation's constitution and said, "There are 19 countries and 39 firms doing business in the north. Why shouldn't Turkey be?"

WE HELD MEETINGS COVERING MANY COUNTRIES

THERE WILL BE PROFIT FROM THE STA

On the topic of the Free Trade Agreement, "A work group will be formed. The group on free trade will certainly be a profitable endeavor for Turkey" spoke Yıldız.