“You have done a marvelous job in an incredibly difficult neighborhood” 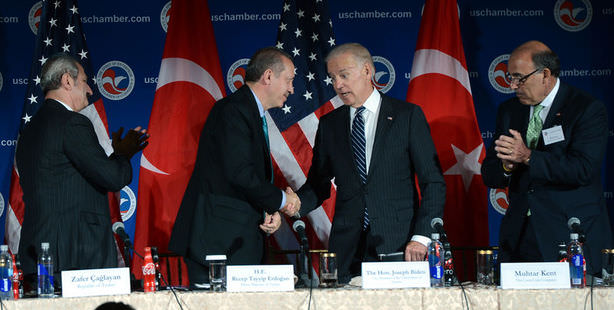 Speaking at a round table meeting organized by the U.S. Chamber of Commerce and attended by Prime Minister Erdoğan, Vice President Biden rained praise on the premier, stating, "I think he has done an absolutely marvelous job in an incredibly difficult neighborhood.”

Prime Minister Recep Tayyip Erdoğan attended a round table meeting hosted by the United States Chamber of Commerce with Vice President Joe Biden on Thursday. Affirming that Turkey's recent credit rating upgrade was an appropriate call, Biden said that he has long been an admirer of Erdoğan and added, "I think he has done an absolutely marvelous job in an incredibly difficult neighborhood. And I think that our security and our economic prosperity are completely tied to the progress that Turkey is making and continues to make."

Vice President Biden pointed out that Turkey's economy, which ranked 26th in 2002, has become the 17th largest economy in the world in 2013, while also tripling during that timeframe, and stated, "The prime minister has set as a goal that by 2023 Turkey will be one of the 10 largest economies in the world. And I have little doubt they'll be able to accomplish that." Biden went on to state that what impresses him most about Prime Minister Erdoğan and the government is the fact that they are determined to advance even further, while also mentioning that the partnership between Turkey and the United States will only further progress through this process.

FTA between Turkey and the U.S.

Biden also announced that during Erdoğan's trip to Washington, he and Obama reached a consensus on working towards establishing a Free Trade Agreement. "We will not only keep Turkey informed of every step of the negotiation with the EU, but we believe that if in fact, we can get by some of the divisions and the differences we have with regard to free trade agreements, and if we can get there before the time we settle the new EU trade agreement, that it will be a great opportunity for Turkey," said Biden.