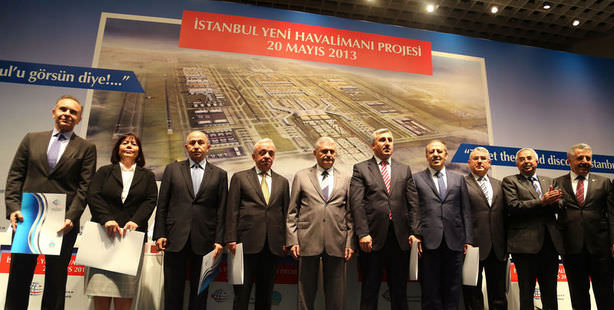 The preliminary contract for the third airport to be built in Istanbul by a Turkish consortium was signed on Monday. “We gave them a hole and we are getting 90 billion liras,” said Transportation Minister Yıldırım in jest.

Yesterday marked the second stage of the biggest tender ever made in the history of the Turkish Republic. The preliminary contract for the construction and operation of the third airport to be built in Istanbul was inked yesterday at a signing ceremony held in the General Directorate of State Airports Authority (DHMI) in Ankara, which coincided with the 80th anniversary of its founding. Also in attendance for the signing were Transport Minister Binali Yıldırım and DHMI Director General Orhan Birdal.

Representatives from the Cengiz-Kolin- Limak-Mapa-Kalyon consortium, which won the tender with the highest bid of 22 billion, 152 million euros signed the initial agreement for the project in the capital yesterday. Speaking at the signing ceremony, Transport, Maritime and Communication Minister Binali Yıldırım jokingly said, "People ask me what we gave in return for this tender. We gave them a hole and we are getting 90 billion liras in return. In addition, we will be receiving a magnificent airport. It will be handed over in 25 years and that's just a bonus."

DEBT DOES NOT SCARE ENTRPRENEURS

"Our entrepreneurs are not frightened by debt. A friend of mine says, 'If they would sell off Istanbul in payments, I would buy half," said Yıldırım, which responded in laughter amongst participants. Explaining that this project, which he referred to as a "milestone" will alter all of Turkey's indicators, Yıldırım stated, "Every day. Istanbul's characteristic of being a transit center stands out even further. The number of transit passengers that came through Istanbul reached 13 million by the end of 2012. As these developments transpire in aviation, the mindframe that we should 'just get by' and that our airports are sufficient is short-sighted. We have chosen to be on the side of service and not that of just observers."

WE WILL PULL THIS OFF

Speaking on behalf of the consortium, Limak Holding Executive Board Chairman Nihat Özdemir stated, "This new Istanbul airport project is not just an investment project for us. In every aspect, this is a project of prestige for Turkey." Explaining that they will be exerting all of their experience and knowledge they have acquired up until now in construction and infrastructure from domestic and foreign projects in order to complete this project in the manner it deserves, Özdemir stated, "Turkey should feel secure. The joint consortium which will be embarking on this project is made up of the region's leading construction and infrastructure firms. We will pull this job off. The building of this new airport in Istanbul will be one of the biggest private-public sector collaborative projects in the world. We will not be taking even a single cent from the state in constructing this project. After we have operated the airport for 25 years, we will be handing the airport and its enclosures over."

Once Minister Yıldırım approves the signing of the preliminary contract, the next stage will involve the formation of a company to be established by the Limak, Cengiz, Kolin, Kalyon and Mapa consortium, which will then be recorded in the trade register, after which the final contract will be signed and the land for the project will be allocated to the consortium's firm.

RESULTING EMPLOYMENT TO AFFECT ONE MILLION

The third airport planned for Istanbul is slated to become one of the largest airports in the world servicing 150 million passengers annually when completed in 58 months' time. Minister Binali Yıldırım notes that this project will provide employment opportunities for 100,000 people, and added that when including the people that will be affected by these 100 jobs, the total figure of those that will be positively affected goes up to one million.

IT WILL CONTRIBUTE TO ISTANBUL

General Directorate of State Airports Authority (DHMİ) General Manager Orhan Birdal states, "The realization of this new airport project will contribute greatly to the goal of turning Istanbul into a significant tourism and financial center in the future."