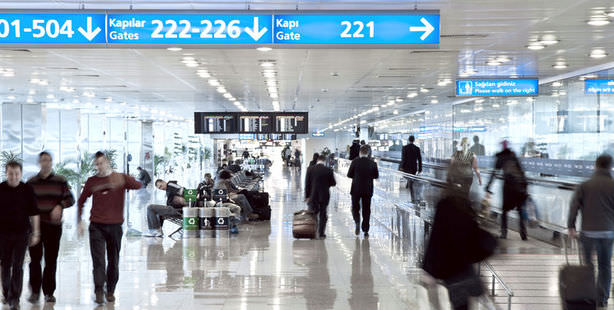 With the 21 percentage of growth incurred in 2012, the Istanbul Atatürk Airport, which is operated by TAV, has been selected as the airport to have the “highest increase in passenger traffic.”

TAV has announced that according to passenger travel figures released on aviation website Anna.aero, Istanbul Atatürk Airport has won the Euro Annies 2013 Award for being the airport to have the highest increase in passenger growth. In 2011, Istanbul Atatürk Airport shared first place with Amsterdam's Schiphol Airport for having serving the highest number of destinations outside of Europe.

In the announcement, TAV Istanbul General Manager Kemal Ünlü share his view that through the steady growth experienced over the past ten years, the Istanbul Atatürk Airport is now one of the world's leading centers of attraction and that despite the worldwide crisis, in 2012 the airport managed to achieve 21 percent growth servicing a total 45 million passengers.

Explaining that with their vast accumulation of knowledge at a global scale they aim to provide their guests with a fast, comfortable and safe travelling experience, Ünlü stated that they have a high-level of collaboration with all of their partners, especially the State Airports Administration (DHMİ) and Turkish Airlines (THY). "We are extremely happy to receive this award from Anna.aero, one of the aviation sector's leading publications," expressed Ünlü.