Get us into FATIH and we’ll give you our codes 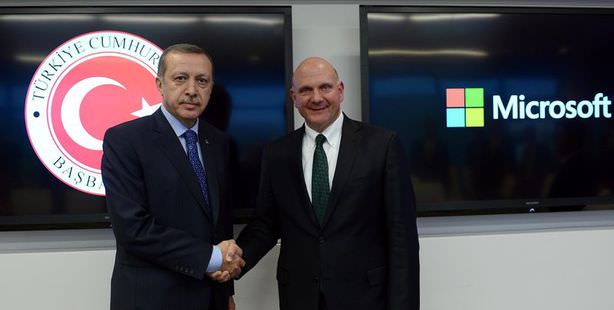 Criticized for keeping their source codes confidential, Microsoft has now made a historical proposal in order to enter the bid for Turkey’s national education FATIH Project. CEO Steve Ballmer made the suggestion personally during a meeting with Prime Minister Erdoğan last week in Silicon Valley by stating, “Include us in the tender and we’ll open up our source codes for you.”

Microsoft has set its sights on Turkey's new groundbreaking FATİH Project. While hosting Prime Minister Recep Tayyip Erdoğan in Silicon Valley last weekend, the Microsoft administration presented a historical offer in order to be able to participate in the software and educational programming tender for Turkey's national education FATİH Project. The proposal was made personally to Prime Minister Erdoğan by Microsoft CEO Steve Ballmer who said, "We have worked hard for this tender. Let us in on the tender and we will pledge to open our source codes for you."

A RESEARCH AND DEVELOPMENT CENTER COULD BE ESTABLISHED

Flying in from Seattle to San Francisco in order to meet with Erdoğan during his visit to Silicon Valley, Ballmer introduced the various efforts they have made as well as the educational programs prepared for the FATİH Project, which aims to equalize opportunities in education and improve technology in schools.

Emphasizing the importance they place on the tender, the Microsoft CEO also shared plans to build a Research and Development center with the Scientific and Technological Research Council of Turkey (TÜBİTAK) aimed at domestic production.

For Microsoft to provide their programming codes to Turkey, would mean that the nation would then be privy to the world's most advanced software technology. If Microsoft enters the tender, then not only will they be implementing their educational programs, but also this would mean that applications geared towards developing students' talents in programming and code writing would also be in effect.

THEY WILL BE IN THE TENDER

According to the information obtained, Turkish officials are in favor of collaborating with Microsoft and will be taking the necessary steps to ensure the corporation takes part in the highly anticipated tender. It has been stated that with certain amendments to the tender specifications, the firm could indeed be included in the tender.