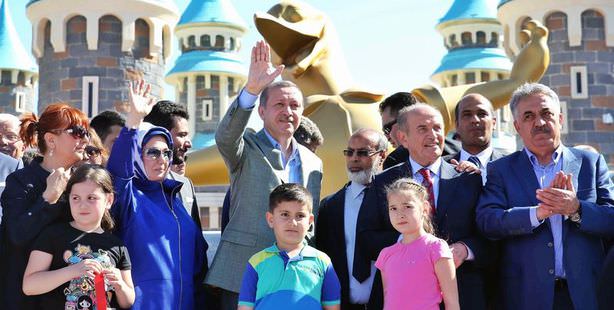 Addressing the crowds at the opening ceremony for Vialand, Turkey’s biggest entertainment park built on a quarry in Istanbul’s historic Eyüp district, Prime Minister Erdoğan said, “They told us to make the Golden Horn a landfill. However, we refused to turn the Golden Horn into tin.”

The entertainment park was constructed in what used to be an old quarry, located on the Haliç, an inlet of the Bosphorus which is also known as the Golden Horn, used as the location where the mud and debris that was removed from the estuary was transported to.

'WE DO NOT TURN THE GOLDEN HORN INTO TIN'

Prime Minister Erdoğan explained that during his time served as Mayor of Istanbul, a proposal was made to simply fill the polluted Golden Horn. Explaining that instead they chose to embark upon this mega project, the Prime Minister said, "If you are determined and have faith, if you have ambition and longing, if you love the people and children of this nation, then you do it. That is because all of these projects are efforts of love."

Addressing the public at the opening ceremony, Prime Minister Erdoğan went on to state the following: "My brothers and sisters, this used to be a quarry. You couldn't cross over the Golden Horn for the smell. No marine species remained.

I was the mayor of Istanbul at that time. We spoke with a number of specialists who told us that there was no other option besides filling the area. However, we said, this is the Golden Horn; we cannot turn this into a piece of tin. Therefore, we were obliged to revive the Golden Horn for our nation and Istanbul residents."

"AREAS OF DESOLATION DO NOT SUIT US"

Prime Minister Erdoğan also broached the subject of the ongoing urban renewal projects they have embarked upon by saying, "We cannot consent to scenes of squalor. Demolished and dilapidated desolation does not suit us."

Erdoğan went on to state that children who have yet to enjoy their childhood will now be able to do so because of Vialand. The project was jointly realized by the private and public sector.

THE SIZE OF 100 FOOTBALL FIELDS

* The project was launched in September 2011.

* The project, build by the partnership of Gürsoy Group and Via Properties, cost 1.150 billion liras.

* Vialand is expected to make a 15 percent contribution to the number of tourists that visit Istanbul annually.

* In addition to the mega theme park, Vialand also includes 250 stores, a 15,000 performing space and an area of greenery spanning 5,000 trees.

* The performance center will host open-air concerts between the months of June to July and will be able to accommodate over 10,000 people simultaneously.

* The performance center will also host a series of special events for the month of Ramadan.

* Nearly 70 percent of all personnel were hired from surrounding regions.

* When operational, Vialand will provide employment opportunities for 4,500 people.