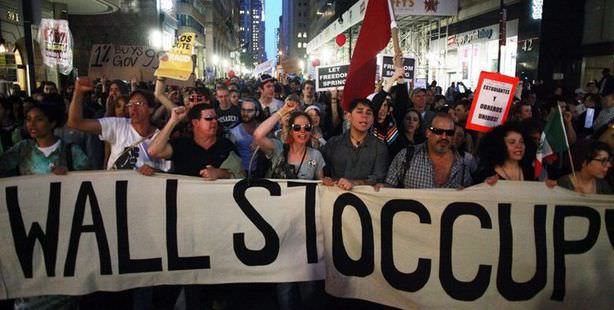 The Occupy Wall Street movement did not pose a significant financial burden in the United States, whereas the financial burden brought on in Turkey from the Gezi Park protests is exponential.

In September, 2011, protesters began the Occupy Wall Street movement on its namesake Wall Street, the center of global capitalism. Protesters proceeded to occupy New York's famous Zuccotti Park for nearly two months. News channel broadcasts did not pay much heed to the protests, which also failed to receive significant coverage in mainstream newspapers. However, the movement was spread throughout social media in full force. They called themselves the Occupy Wall Street (OWS) movement.

WHAT DID THEY WANT?

Demonstrators in Zucotti Park were protesting unjust income distribution, the overall enslavement by the financial sector, the control over politics by mega firms, taxes not being allocated appropriately as well as environmental pollution and wars. They had a series of tangible demands and drafted documents. The movement was centered on the slogan "We are the 99%", in protesting the dominance of the majority by the minority 1%.

It's possible to draw a comparison of certain aspects of the gathering of protesters on that very first day to protect the trees in Gezi Park and the OWS movement which occupied Zuccotti Park. However, the use of excessive force by police quickly distanced the appearance of the protests in Taksim's Gezi Park from the OWS movement. First and foremost, OWS was passive and pacifist all the way to the end. Insults were not hurled at those they didn't approve of or who did not feel the way they did. No matter what, violence was contrary to the spirit of OWS. The NYPD harmed a number of protesters through disproportionate force. During that time, over a thousand passively resisting protesters were detained. Tear gas was sprayed. Tents were burned by police. Demonstrators were prohibited from continuing to demonstrate and protest in the park. Within time, the movement lost its imperativeness. However, the OWS movement managed to protect itself from provocations and succeeded in coming to an end from the same point that it started. The Taksim Gezi Park movement has taken on a whole new aspect. Violence bred violence and the crowds that gathered under the notion of protecting trees suddenly found themselves in the center of provocations. Illegal organizations became part of the process and the picture transformed entirely to the detriment of Turkey.

THE COST OF DEMONSTRATIONS

The United States did not bear a significant financial burden from the OWS movement. The stock exchange wasn't affected. Cities weren't destroyed. Public vehicles were not harmed. However, the demonstrations which began at Taksim Gezi Park and quickly changed shape have an "evident" financial burden running over a billion dollars. The drop in the stock exchange, cancellations in the tourism sector, the damage incurred by cities, the attacks on public property and the cost spent on security continues to increase. And Turkey's economy is suffering.