Turkey invests in iron and steel in Algeria 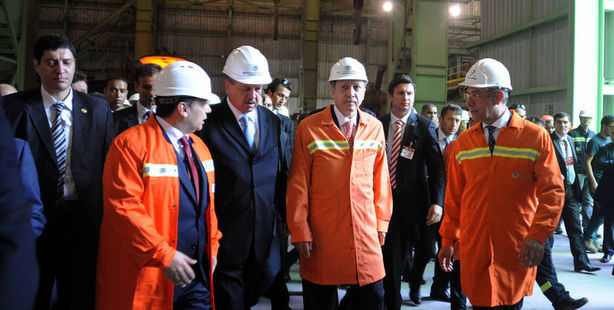 Tosyalı Holding opened a 750 million dollar steel-iron factory in Algeria in a ceremony attended by Prime Minister Recep Tayyip Erdoğan. Expected to rake in an annual one billion dollar revenue, the facility will also provide one thousand jobs.

Turkey's mega iron-steel producers Tosyalı Holding have made a major investment in Algeria by building a plant in the Mediterranean town of Oran. Tosyalı, which last year purchased one of the largest steel production facilities in Eastern Europe, Montenegro's Zeljezara AD Niksic, has now dished out 750 million dollars on establishing the largest iron-steel factory in Algeria. The factory, which is also Turkey's largest steel investment abroad, was opened on Wednesday by Prime Minister Recep Tayyip Erdoğan and his Algerian counterpart Abdelmalek Sellal. The facility, which is aiming for a billion dollar annual revenue, will also provide employment opportunities for 1,000 people.

TURKEY IS YOUR HOME AS WELL

Speaking at the opening for the facilities in which the first groundbreaking ceremony was held in 2011, Prime Minister Erdoğan emphasized that Turkey has never been a distant nation to Algeria. Erdoğan reminded that last year over 100,000 Algerian tourists visited Turkey and stated, "Although this is a significant number, it is not enough. Turkey isn't your second home; it is your true home. Please come at every opportunity and be our guest."

Pointing out that Turkey and Algeria have always had strong relations in every arena, Erdoğan noted that Turkish investors have nearly 200 projects in Algeria and said that they want to soon bring the five billion dollar trade volume up to ten billion dollars.

TO PRODUCE 1.2 MILLION TONS OF STEEL

With an annual capacity of producing 1.250 million tons of molten steel, the factory stands to be the largest iron-steel investment in the region. Products will be produced using advance technology and will satiate the need for a growing and developing Algeria's domestic market. The factory aims to employ 1,400 by the time the factory is completed at the end of 2014. Speaking at the opening ceremony; Tosyalı Holding Executive Board Chairman Fuat Tosyalı stated that with over 60 years of accumulation of knowledge and a strong market structure they stand to be the largest steel pipe producers in the private sector. "Today is a historical day for our firm and the Turkish steel sector. As part of our regional growth target, we are now conducting Algeria's largest private sector investment," said Tosyalı.