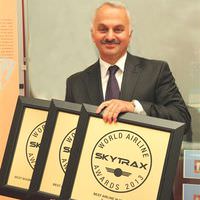 Turkish Airlines won the Skytrax award for Europe's Best Airline for a third time and was also given two other awards.

According to Skytrax ratings, Turkish Airlines was seen fit to be awarded "Europe's Best Airline Company".

Winning this award meant that Turkish Airlines has now been voted as the best airline in Europe for a third time. Skytrax, which organizes yearly award ceremonies for airlines, has also awarded the Turkish Airlines Comfort Class seat the "Best Premium Economy Seat" award while THY was also given the award for the "Best Airline in Southern Europe".