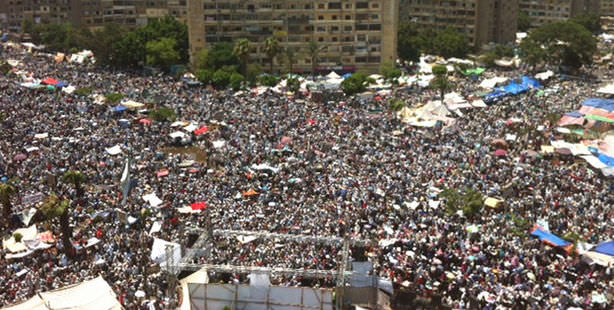 The street demonstrations followed by the military coup have struck a heavy blow to Turkey’s exporting industry. When everything came to a halt within the country, Turkey’s exporting lorries found themselves literally stuck in limbo. In Egypt there are 200 lorries and in Saudi Arabia 500 lorries which are waiting to be able to enter Turkey, while in İskenderun, there are 350 lorries that are awaiting access into Egypt.

The military coup which transpired in Egypt on Wednesday through ousting an elected government has had negative effects on Turkey's exports. Add to that the ongoing protests in Tahrir Square and as a result Turkey's lorries in Egypt and Saudi Arabia have been unable to make it into Turkey. International Transporters Association Administrative Board Member Hamit Şanverdi explains that at present, there are 200 lorries in Egypt waiting to cross in to Turkey and 500 Turkish lorries that are presently stranded in Saudi Arabia. Pointing out that there are 200 Turkish lorries awaiting entry into Turkey from Portsaid in Egypt, Şanverdi says, "For now, the port appears to be safe, however there is no telling what it will be like in the days to come."

There are said to be approximately 500 lorries in Saudi Arabia that are unable to return to Turkey through Egypt due to the ensuing events. Due to the lack of security on the highways, these lorries are currently waiting at the Duba Port. Explaining that it could be of benefit to temporarily use the Suez Canal for access, Şanverdi said that it would be best to access Saudi Arabia via the Suez Canal and therefore by pass Egypt entirely, however due to the high cost of entry to the canal, our state officials may need to establish a solution. "There are presently 350 lorries waiting at the İskenderun Port to go to Egypt by RO-RO. The goods transported are going to be ruined," said Şanverdi.

Zuhal Mansfield, the representative for Turkey in the Foreign Economic Relations Board (DEİK) Turkey-Egypt Business Council has stated that economic relations between the two countries will not be affected by this military coup that has transpired in Egypt without anyone's approval. Stating that the era of military coups needs to come to an end and is an outdated practice, Mansfield said, "To defend a military coup in this era is a source of shame. Ongoing projects will continue even if the government changes. There is a 100 billion dollar infrastructure project to be conducted in Egypt."

We will minimize the crisis

Istanbul Chamber of Commerce President İbrahim Çağlar has announced that they will be dealing with the concerns Turkish businessmen who are active in Egypt have as a result of the military coup in Egypt. Sharing plans to meet with members who conduct trade with Egypt, Çağlar stated, "We will be holding discussions on how to minimize the effects of this crisis." Pointing out that for any country's democracy or democratic institutions to incur harm will damage said country's relations with other nations, İbrahim Çağlar expressed that their greatest wish is for Egypt to return to a democratic regime as soon as possible.

Contractors will continue to do their jobs

Construction Contractors Union President Şükrü Koçoğlu says that the extent of projects Turkey has undertaken in Egypt is not excessive, and therefore the sector will not be greatly affected. The fact that there isn't a significant amount of ongoing projects at the moment coupled by the announcement of plans to hold a democratic election, are also factors.

Stock exchange on the rise

The turmoil in Egypt has also not had a grave effect on the stock exchange. The Egypt stock exchange even went up by seven percent with the appointment of the new interim president following the military intervention.